Class 9 : States of Matter and Its Properties Class 9 Notes | EduRev

The document States of Matter and Its Properties Class 9 Notes | EduRev is a part of the Class 9 Course Science Class 9.
All you need of Class 9 at this link: Class 9 Physical Nature of Matter1. Matter is made up of Particles

The particle nature of matter can be demonstrated by a simple activity.

Conclusion: This activity shows that matters are made of small particles. And there is space between these particles.

Question 1:What will be the volume of water in the beaker if we add one teaspoon of salt to it?
Explanation

Water has large intermolecular spaces. Salt molecules fill into that void, leading to no change in the volume.

2. The Constituent Particles of Matter are Extremely Small in Size

Conclusion: A visible particle may have a large number of smaller particles in it.

Characteristics of Particles of Matter

1. Particles of Matter are Continuously Moving

Aim: To demonstrate that the Kinetic Energy of particles increases with increase in temperature.

"This spontaneous intermixing of particles of two different types of matter is called diffusion". Diffusion is a natural phenomenon and never stops

Note: The rate of diffusion becomes faster with an increase in temperature because, at a higher temperature, the particles have more energy and hence move faster.

Question 2:Kinetic energy of molecules is directly proportional to

Other Examples of Diffusion

2. Particles of Matter Attract each other

The following activity may be carried out to demonstrate the attractive forces between particles of matter.

Matter can be classified into 3 states on the basis of physical state- Solids, Liquids and Gases. Solids generally do not exhibit diffusion due to smaller inter-particle spaces and the absence of translatory motion.

Some examples in which solids show diffusion

Examples: Water, Alcohol, Milk, Diesel, Petrol, Kerosene Oil, Vegetable Oil, Fruit Juices etc.Solids, liquids as well as gases can diffuse into liquids. This is due to the fact that the interparticle spaces in liquids are larger and the particles in liquid state move freely.

Evaporation an Example of Gaseous Matter

Question 3:Which among these will have the highest force of intermolecular attraction?

To demonstrate air is compressible while water and solid are not, activity wants us to fill three syringes, each with one type of object viz, water, chalk powder, and air and ask us to compress it. 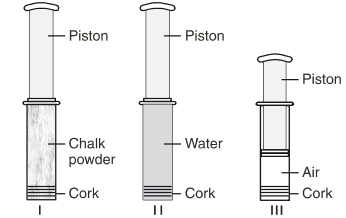 Observation: With some force, we are able to compress the syringe filled with air while other syringes are completely non-compressible.

Conclusion: This experiment demonstrates that gases are compressible while liquids and solids are not.

Explanation of Solid, Liquid and Gas State on the basis of Molecular Structure Table: Comparison of characteristic properties of solids, liquids and gases