What is Ionic Compound?

The structure of an ionic compound depends on the relative sizes of the cations and anions. Ionic compounds include salts, oxides, hydroxides, sulphides, and the majority of inorganic compounds. Ionic solids are held together by the electrostatic attraction between the positive and negative ions.For example, the sodium ions attract chloride ions and the chloride ion attracts sodium ions. The result is a three-dimensional structure of alternate Na+ and Cl– ions. This is a crystal of sodium chloride. The crystal is uncharged because the number of sodium ions is equal to the number of chloride ions. The forces of attraction between the ions hold them in the structures. 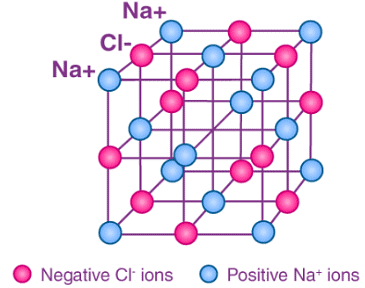 These ionic bonds between the charged particles result in a giant structure of ions. Because the ions are held together tightly in these giant structures it takes a lot of energy to break all the bonds. As a result, ionic compounds have high melting points and boiling points. 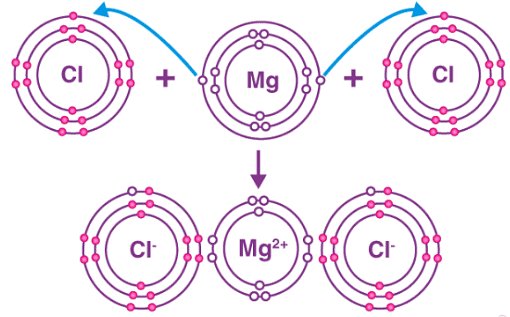 From the above example, ionic compounds can be defined as the compounds formed by the transfer of electrons between metals and non-metals. The bond formed between them is known as the ionic bond. Due to the presence of oppositely charged ions, ionic compounds are held strongly by the electrostatic force of attraction. Prominent properties of ionic compounds are:

➤ What are the common ionic compounds?Ionic compounds have high points of melting and boiling and appear to be strong and brittle. Ions may be single atoms, such as sodium and chlorine in common table salt (sodium chloride) or more complex groups such as calcium carbonate. 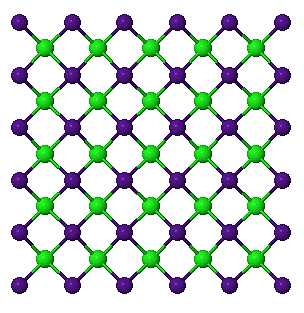 CsCl has a cubic structure that consists of an infinite chain of ions. The Cs (or Cl) ions sit at the eight corners of the cube and the Cl (or Cs) sit at the center of the cube (thus it is NOT a body-centered lattice since that requires the SAME ion to occupy the edges and center). The CN of both cation and anion is 8.

Complexes that share this structure include:CsBr, CsI, TlCl, TlBr and under high pressure RbCl, RbBr, RbI.Note that the difference between this and the fluorite structure is that alternate cations are missing in the fluorite lattice.

Carbon atoms can form four covalent bonds. This lets it form many different organic substances, and to exist as diamond, graphite and fullerenes. Different substances have different bulk properties.

Carbon is an element in group 4 (IUPAC group 14) of the periodic table. Each carbon atom can form four covalent bonds. This means that carbon atoms can form families of similar compounds that have:

Organic compounds are substances that contain carbon. There is a vast array of natural and synthetic organic compounds because of the ability of carbon to form four covalent bonds. Carbon can also form giant covalent structures, including diamond and graphite.

Diamond has a giant covalent structure in which:

Graphite has a giant covalent structure in which:

Graphene is another form of the element carbon. Its structure resembles a single layer of graphite. Graphene has a very high melting point and is very strong because of its large regular arrangement of carbon atoms joined by covalent bonds. Like graphite, graphene conducts electricity well because it has delocalised electrons that are free to move through its structure.

Fullerenes are forms of carbon, and include nanotubes and buckyballs.

➤ NanotubesA nanotube resembles a layer of graphene, rolled into a tube shape. Nanotubes have high tensile strength, so they are strong in tension and resist being stretched. Like graphene, nanotubes are strong, and they conduct electricity because they have delocalised electrons. 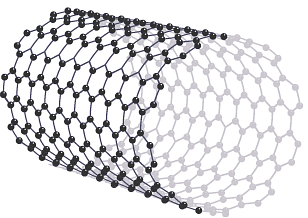 ➤ BuckyballsBuckyballs are spheres or squashed spheres of carbon atoms. They are made up of large molecules but do not have a giant covalent structure. Weak intermolecular forces exist between individual buckyballs. Little energy is needed to overcome these forces, so substances consisting of buckyballs are slippery and have lower melting points than graphite or diamond. 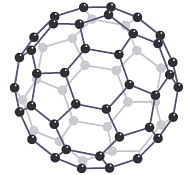 ➤ Melting, evaporating and boilingEnergy must be transferred, by heating, to a substance for these changes of state to happen. During these changes the particles gain energy, which is used to break or overcome:

➤ Condensing and freezingEnergy must be transferred from a substance to the environment for condensation and freezing to happen. During these changes of state the particles lose energy as bonds form between the particles.

➤ Predicting a physical stateThe state of a substance at a given temperature can be predicted if its melting point and boiling point are known. The table summarises how to work this out.

Q : The melting point of oxygen is -218°C and its boiling point is -183°C. Predict the state of oxygen at -200°C.Ans: Oxygen will be in the liquid state at -200°C (because this is between its melting and boiling points).

Individual atoms do not have the physical properties of the substances that contain them. For example, a copper atom cannot conduct electricity, even though a piece of copper can do this. Bulk properties are properties due to many atoms, ions or molecules acting together.

Malleable substances can be bent or hammered into shape without shattering. Metals are malleable. When a force is applied, layers of metal ions can slide over each other while still being attracted to the ‘sea’ of delocalised electrons.

Ionic substances and giant covalent substances are usually brittle. They shatter when bent or hit because many strong ionic bonds or covalent bonds break at once.

A substance can conduct electricity if both:

Note that graphite, graphene and fullerenes are covalent substances that do conduct electricity. This is because, like metals, they contain delocalised electrons.