1. (Z-parameters) Open circuit Impedance Parameters Its use is premised on selecting the input port current, I1, and the output port current, I2, as independent electrical variables.where the zij are called the z-parameters of a two-port net­work. Here, input and output voltages are expressed in terms of input and output currents. The equations are given below.V1 = Z11I1 + Z12I2 V2 = Z21I1 + Z22I2 where, Z11, Z12, Z21 and Z22 are called the Z-parameters.So the Z-Parameter can be found as follow:

Here g12 and g21 are dimensionless coefficients, g22 is impedance and g11 is admittance. 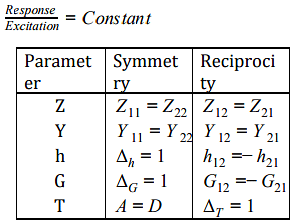 7. INTERCONNECTION OF TWO-PORT NETWORKS
Two-port networks can be connected in series, parallel or cascade. the configuration listed below: