In this situation how much work is done in removing the charges to infinity?

Ans. (i) Move towards centre;

Solution. (i)The force on charge q kept at A due to charges kept at B and C

Clearly the two forces are not equal. Also as F2 > F1 the charges will move towards the centre.

(ii) For charges to remain stationary

The charge Q should be negative.

The potential energy of the system is

This is the amount of work needed to move the charges to infinity.

Q.2. A rigid insulated wire frame, in the form of right triangle ABC is set in a vertical plane. Two beads of equal masses m each carrying charges q1 and q2 are connected by a chord of length l and can slide without friction on the wires. Considering the case when the beads are stationary, determine :

(i) the angle α,(ii) the tension in the chord, and(iii) the normal reactions on the beads.

If the chord is now cut, what are the values of the charges for which the beads continue to remain stationary?

Solution. Because of equilibrium of charge q1

Because of equilibrium of charge q2

Now the charges should be unlike for equilibrium.

Given that surface charge densities are equal.

Potential at O due to inner sphere 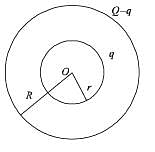 Potential at O due to outer sphere

The total potential at the common centre

Q.4. A thin fixed ring of radius 1 metre has a positive charge 1 × 10–5 coulomb uniformly distributed over it. A particle of mass 0. 9 gm and having a negative charge of 1 × 10–6 coulomb is placed on the axis at a distance of 1 cm from the centre of the ring. show that the motion of the negatively charged particle is approaximately simple harmonic. Calculate the time period of oscillations.       (1982 - 5marks)

Solution. KEY CONCEPT :  The electric field due a uniformly charged ring of radius r at a point distant x from its center on its axis is given by

∴ Force on the negative charge q will be F = qE

⇒ The motion is simple harmonic in nature.

Comparing the above equation with A = -ω2x we get

Q.5. The figure shows two identical parallel plate capacitors connected to a battery with the switch S closed. The switch is now opened and the free space between the plates of the capacitors is filled with  a dielectric of dielectric constant (or relative  permittivity) 3. Find the ratio of the total electrostatic energystored in both capacitors before and after the introduction of the dielectric.             (1983 - 6  Marks)

Solution. The potential difference across each capacitor is V.

When the switch opened and a dielectric is inserted between the plates of capacitors, the new capacitance is 3C.

(charge on capacitor B remains same when switch is opened)

The moving charge, when it reaches the point C at a distance of 4 m from O, has a kinetic energy of 4 joules.

Calculate the distance of the farthest point D which the negative charge will reach before returning towards C.

Solution. Total energy of the system of three charges when the charge –q is at C

By the principle of conservation of energy from (i) and (ii), we get

Q.7. Three particles, each of mass 1 gm and carrying a charge q, are suspended from a common point by insulated massless strings, each 100 cm long. If the particles are in equilibrium and are located at the corners of an equilateral triangle of side length 3 cm, calculate the charge q on each particle. (Take g = 10 m/s2).             (1988 - 5 Marks)

Solution. Each mass will be in equilibrium under the act of three force namely tension of string, weight, resultant electrostatic force of the two other charges out of these three forces F and mg are perpendicular. 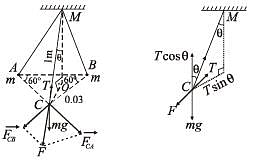 Let T make an angle θ with the vertical

NOTE THIS STEP : Resolving T in the direction of mg and F and  applying the condition of equilibrium, we get

Q.8. A point particle of mass M is attached to one end of a massless rigid nonconducting rod of length L.

Another point particle of the same mass is attached to the other end of the rod. The two particles carry charges +q and – q respectively. This arrangement is held in a region of a uniform electric field E such that the rod makes a small angle θ (say of about 5 degree) with the field direction, fig. Find an expression for the minimum time needed for the rod to become parallel to the field after it is set free.         (1989 - 8mark)

Solutioon. Time for the dipole to align along the direction of electric field will be

(i) Find the potential of the three shells A, B and C. (ii) If the shells A and C are at the same potential, obtain the relation between the radii a, b and c.

The potential of shell A

Given that VA =VC

(a) Show that all points in the x-y plane where the electric potential due to the two charges is zero, lie on a circle.

Find its radius and the location of its centre. (b) Give the expression V (x) at a general point on the x - axis and sketch the function V (x) on the whole x-axis. (c) If a particle of charge + q starts form rest at the centre of the circle, show by a short quantative argument that the particle eventually crosses the circle. Find its speed when it does so.

Solution. (a) Let P be a point in the X-Y plane with coordinates (x, y) at which the potential due to charges – 2Q and + Q placed at A and B respectively be zero.

The potential at M will be

From the above expressions

Q.11. (a) A charge of Q coulomb is uniformly distributed over a spherical volume of radius R metres. Obtain an expression for the energy of the system.

(b) What will be the corresponding expression for the energy needed to completely disassemble the planet earth against the gravitational pull amongst its constituent particles ?

Solution. (a) Let us consider a shell of the thickness dx at a distance x from the centre of a sphere

Let r be the charge per unit volume of the sphere

Potential at the surface of the sphere of radius x

∴ Potential at the surface of the sphere of radius x =

This is also the energy stored in the system.

(b) The above energy calculated is

(c) During the charging process, let at any instant the spherical conductor has a charge q on its surface.

The potential at the surface

∴ Total amount of work done in bringing charge Q on the surface of spherical conductor.

(i) The dielectric slab is placed inside A as shown in figure (a). A is then charged to a potential difference of 110V.

Calculate the capacitance of A and the energy stored in it. (ii) The battery is disconnected and then the dielectric slab is moved from A. Find the work done by the external agency in removing the slab from A. (iii) The same dielectric slab is now placed inside B, filling it completely. The two capacitors A and B are then connected as shown in figure (c). Calculate the energy stored in the system.

The combined capacitance is

NOTE : While taking out the dielectric, the charge on the capacitor plate remains the same.