Q. 16. Prove, by vector methods or otherwise, that the point of intersection of the diagonals of a trapezium lies on the line passing through the mid-points of the parallel sides. (You may assume that the trapezium is not a parallelogram.)            (1998 - 8 Marks) 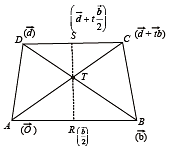 Equations of AC and BD are

For point of intersection say T compare the coefficients

Comparing the coefficients, we get

which is true . Hence proved.

Where θ is the angle between

is a unit vector perpendicular to both

and is such that

(θ is angle between

be the position vectors by A, B, and C respectively,

Let AB, BE and CF be the bisectors of ∠A, ∠B , and ∠C respectively. 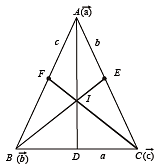 a, b, c are the lengths of sides BC, CA and AB respectively.

Now we know by angle bisector thm that AD divides, BC in the ratio

∴ The position vector of D is

Let I be the point of intersection of BE and AD. Then in ΔABD, BI is bisector of ∠B.

∴ It must lie on CF as well.

[We can also see that p.v. of intersection of

Above prove that all the ∠ bisectors pass through I, i.e., these are concurrent.

are some possible values.

Solution. Given data is insufficient to uniquely determine the three vectors as there are only 6 equations involving 9 variables.

∴ We can obtain infinitely many set of three vectors,

From the given data, we get

[where θ is the angle between

Now since any two vectors are always coplanar, let us suppose that

are in x-y plane.

is along the positive direction of x-axis 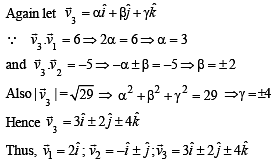 are some possible answers.

are nonzero vectors for all t and

if and only if

are parallel vectors for this t.

Q. 22. Let V be the volume of the parallelopiped formed by the vectors

And mid pt. of PQ lies on the plane, (Clearly we have to find image of pt. P with respect to plane). 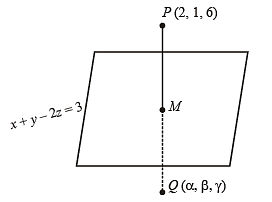 For some value of 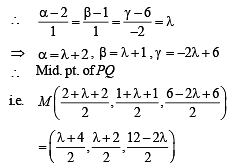 are three non-coplanar unit vectors and

are the angles between

are unit vectors along the bisectors of the angles

Let P be a pt. on angle bisector of ∠AOB such that OAPB is a parallelogram

∴ In ΔOAP, OA= AP a unit vector in the direction of

∴A unit vector in the direction of 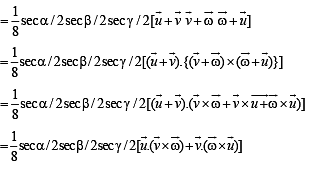 when ever any two vectors are same)

are distinct vectors such that

(Note that ΔABC is an equilateral Δ here.) 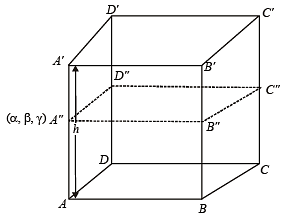 which is a plane parallel to ABCD .  Hence proved.

Solution. Following fig. shows the possible situation for planes P1 and P2 and the lines L1 and L2

Which is intersection line of two planes

Any plane containing this line will be the plane passing through the intersection of two planes (i) and (ii).

Thus the plane containing given line can be written as

As its distance from the pt.

Squaring both sides, we get

Q. 30. If the incident ray on a surface is along the unit vector

the reflected ray is along the unit vector

the normal is along unit vector

Solution. Given that incident ray is along

reflected ray is along

, outwards. The given figure can be redrawn as shown. 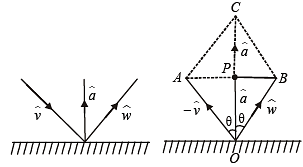 We know  that incident ray, reflected ray and normal lie in a plane, and angle of incidence = angle of reflection.

, will be along the angle bisector of

[∵ Angle  bisector will along a vector dividing in same ratio as the ratio of the sides forming that angle.]

is a unit vector.

Substituting this value in equation (1) we get