It was a day of spring-festival and all the villagers were going brightly dressed to a fair. A little boy and his parents were also among them. The kid was excited and thrilled to see the small toy shops on the way and the flies and bees in the fields. His parents kept calling him over and reminded him to walk beside them.

At last, they reached the fair and a large crowd of people left the boy confused. He was happy and bewildered at the same time. He saw a sweetmeat seller at the entrance and was tempted to have the burfi displayed on the counter. He demanded the sweet half-heartedly because he knew that instead of buying it for him, his parents would term him greedy. So he moved on and soon came across a flower-seller. Fascinated by the gulmohur garlands, he again made a faint demand for flowers but knew well that his parents would not buy anything, for flowers were cheap in their opinion. Moving on, he saw a balloon-seller. He was thrilled to see the brightly coloured balloons but knew that his parents would not buy one for him because they thought that he was too old to play with balloons. Next, a snake-charmer playing the flute drew his attention. The child moved towards him a little but withdrew his steps because he knew that his parents had forbidden him to hear such rough music. On moving ahead the child was charmed by a roundabout in full swing. Failing to resist his desire, he made a bold request to his parents to let him go on the roundabout.

The child did not get any reply, so he turned to look at his parents. They were not to be seen anywhere near him. He got extremely scared and started crying. He ran here and there but could not find them. He rushed in panic to a shrine which was crowded with people. He tried to make his way through the feet of this crowd but was knocked down and began crying loudly. A man heard his cries and rescued him from being trampled.

Lifting the little boy in his arms, the kind man asked him how had he got there and whose baby he was. The scared child did not answer and kept crying and asking for his parents. The good man tried to soothe him and took him to the roundabout offering to get him a ride on the horse. But the child did not want anything else other than his mother and father. The man took the inconsolable child to the snake-charmer, the balloon-seller, and the flower-seller one by one. He offered to fulfil all wishes that he had made just a little while ago, but the child turned down all the offers. He just wanted his parents and nothing else.Summary (2):The Lost Child’ is an interesting story. It describes the working of a child’s mind. In this story, a child wants to buy a number of things. He feels sad when his parents don’t buy anything for him. But when he is separated from his parents, he loses interest in everything.It was the festival of spring. A large number of men, women and children were going to the fair. They were dressed in new clothes. They were in a happy mood. A child was also going with his parents to the fair. He was very happy. He was attracted by various things. He lagged behind again and again. His parents called him to come along. The child ran and joined his parents. 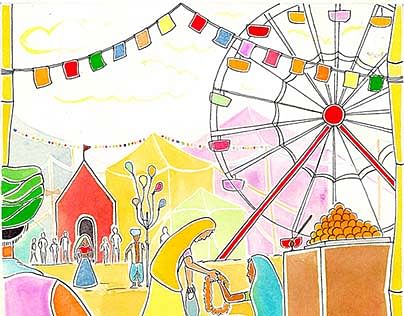 The child wished to buy a toy from a toy shop. But his father stared at him with his red eyes. There was a mustard field on the way. The boy saw a beautiful butterfly in the field. He tried to catch it. His parents again called him. After some time, the child’s parents rested under a banyan tree near t well. The child began to gather the fallen petals.At last, they reached the fair. The child saw a sweet-seller. He desired to have some burfi. But he knew that his father would not buy it for him. He would call him greedy. So he did not press his demand. He then wished to enjoy a juggler’s tricks. He also wanted to have balloons and flowers. But he knew that his parents would not agree to his demands. So he moved on along with them.Then the child saw a ’roundabout’. He wished to enjoy a ride on that roundabout. He called his patents. But there was no reply. He turned back. His parents were nowhere to be seen. His heart was filled with fear. He started weeping. He ran about crying, “Mother, father.” He looked everywhere in the fair. But he could not find them anywhere. A kind man lifted him up in his arms. He tried to console the child. The man took him e the flower-seller, balloon-seller, juggler and the joy-ride. But the child had lost interest in everything. Ile went on crying, “1 want my mother, I want my father!”SummaryThis story highlights a child’s love for his parents. It is the festival of the spring. Everyone is going to the festival. The child is very happy and excited because he is also going to fair with his parents. On the way to the fair, the child is fascinated by the natural beauty. He gets attracted to various things but he does not ask for these things because he knows that his parents cannot afford all these things. He was engrossed in watching the roundabout. Suddenly, he noticed his parents were not there. He saw a snake charmer. He liked the music and wanted to stay there for some time but he moved on with his parents because such music was not approved by his parents. Seeing the merry go round, the first time he expressed his desire but there was no reply. He was engrossed in watching the roundabout. Suddenly, he noticed his parents were not there. He searched for his parents here and there. He was lost. He started crying. He ran towards a shrine. There was a big crowd. In the crowd, he was pushed back. A kind-hearted man heard him crying. He stopped and lifted the child in his arms. He tried to soothe him by offering all these things which he desired but he was crying continuously for his parents. The man offered him everything but the child refused to accept them. These things had lost their charm. Now the child wanted only his parents.

The document Summary:- The Lost Child Notes | Study English Class 9 - Class 9 is a part of the Class 9 Course English Class 9.
All you need of Class 9 at this link: Class 9
Join Course