A. RESULTANT OF TWO CONCURRENT FORCES - Parallelogram Law of Forces

2. The greatest and least resultants of two forces F1 and F2 are 17 N and 3 N respectively. Determine the angles between them when their resultant is √149 N

3. A screw eye is subjected to two forces F1 and F2 as shown in figure. Determine the magnitude and direction of the resultant force by parallelogram method 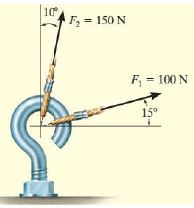 4. The two structural members, one of which is in tension and the other in compression, exert the indicated forces on joint O. Determine the magnitude of the resultant R of the two forces and the angle which R makes with the positive x-axis. 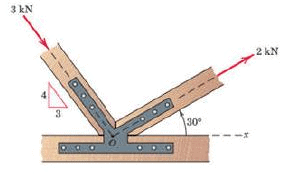 The replacement of a single force by a several components which will be equivalent in action to the given force is called resolution of a force.Forces can be resolved in any 2 directions. However, it is convenient to resolve them into the two orthogonal components (mutually perpendicular directions) 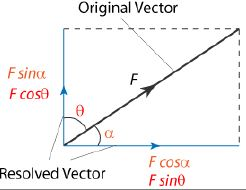 1. Four forces act on bolt A as shown. Determine the resultant of the force on the bolt. 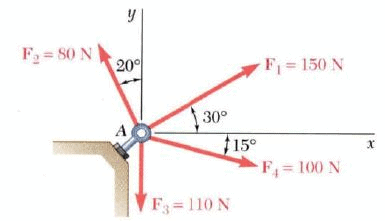 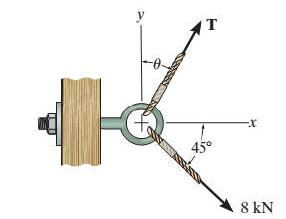 3. Determine the resultant of the 3 forces acting on the bracket and its direction. 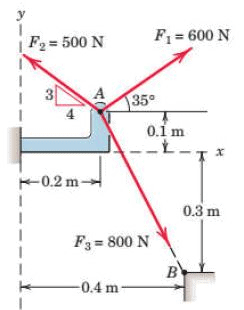 4. The forces 20 N, 30 N, 40 N, 50 N and 60 N are acting at one of the angular points of a regular hexagon, towards the other five angular points, taken in order. Find the magnitude and direction of the resultant force. 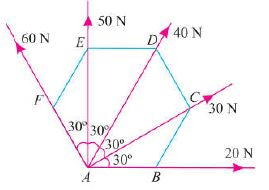 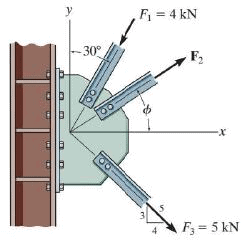 1. Determine the resultant of the forces shown below 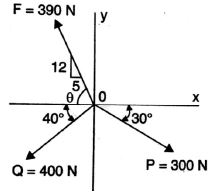 2. Determine the resultant of the forces acting on the ring shown in figure. 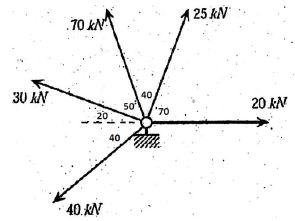 3. Find the resultant of the three concurrent forces as shown on figure. 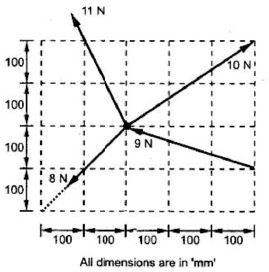 4. Find the magnitude and direction of the resultant of the following forces.

iii. 30 N towards North West and

The tendency of a force to rotate the body in the direction of its application a force about a point that is not on the line of action of the force is called Moment of force or simply moment.Moment is also referred to as torque. 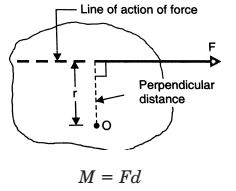 Moment is a vector quantity whose direction is perpendicular to the plane of the body. The right-hand rule is used to establish the sense of direction of moment. Throughout the text, clockwise moments are taken as positive while anti-clockwise as negative.

Varignon’s Theorem or Principle of Moments 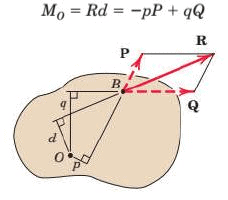 The moment produced by two equal, opposite, and non-collinear forces is called a couple. The perpendicular distance between the lines of action of the two and opposite parallel forces is known as arm of the couple.

A couple can be represented by a vector with magnitude and direction equal to the moment of the couple. Differences between Moment and Couple

A system of several forces and couple moments acting on a body can be reduced to equivalent single resultant force acting at a point O and a resultant couple moment.

D. RESOLUTION OF FORCE INTO FORCE AND COUPLE SYSTEM

Suppose we have to sift he force from point A to B. The procedure to be followed

1. Apply 2 equal and opposite force at point A parallel to force B of the same magnitude

2. If the points are separated by a distance d, the opposite forces F and –F form a couple retaining force F at point B in the same direction as A 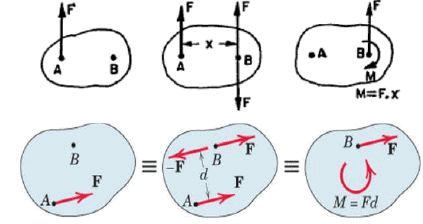 1. Replace the force system acting on the beam by an equivalent force and couple at point B.

2. Reduce the following force system into

a) A single force

b) Resultant force and couple acting at point A.

c) Resultant force and couple acting at point B.

3. Replace the force system by a resultant force and couple moment at point O. 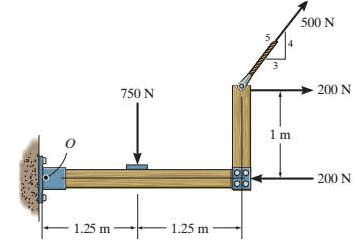 4. Two coplanar forces P and Q are shown in figure. Assume all squares of the same size.

i) If P = 4 kN, find the magnitude and direction of Q if their resultant passes through E

ii) If Q = 110 kN, find the magnitude and direction of P if their resultant passes through F 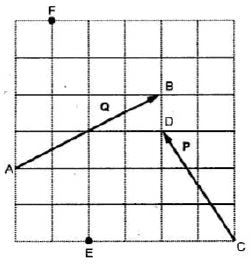