The document Summary,Short,Long Q and A : Ch-8- MEMORIES OF CHILDHOOD,Vistas English, Class 12 | EduRev Notes is a part of the Class 12 Course English Class 12.
All you need of Class 12 at this link: Class 12

MEMORIES OF CHILDHOOD By  ZITKALA-SA AND BAMA 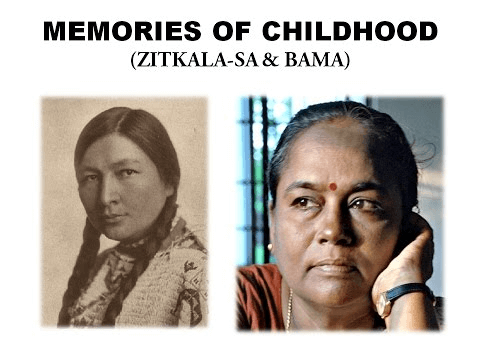 - She describes her experiences on her first day at the Carlisle Indian School.

-  The customs and rules of the place were strange and new to her.

- At breakfast, she was embarrassed as she did not know the routine of the place.

- When she comes to know that they were planning to cut her hair, she protests by hiding under the bed, even though she knew it was futile. In her culture, it was the cowards whose hair was shingled.

- She felt like an animal driven by a herder.

- The second part is an excerpt from the autobiography ‘Karukku’ by Bama – a Tamil Dalit.

- She was in her third grade when she becomes aware of the indignities that the lower caste people face.

- She happens to see an elderly person from her community abase himself in front of a higher caste person as he was not supposed to touch the food that he was ordered to fetch for the landlord.

- Later, her brother explains to her that the incident was not at all funny as she initially thought, but very pathetic. The people from the lower caste were treated as untouchables.

- She was deeply saddened and decided to study hard to overcome discrimination.

1. What were the indignities that the new girls were subjected to at Carlisle Indian School?

The girls were scrutinized thoroughly and supervised by a grey-haired woman. They were made to wear tight fitting immodest clothes and stiff shoes. During breakfast a  systematic and regimental discipline was observed. The girls with long hair had to get them shingled and they had to submit to the authorities who were strong, unfeeling and cruel.

2. On learning that her long hair would be cut the author decided to struggle first. What does this tell us about the author?

The author knows that she could never prevail against the authorities, yet she struggles against the injustice. Her mother had told her that only cowards had their hair shingled and she firmly believed that she was not one. To prove her point as well as raise her voice against the indignity, she struggles.

3. Why did Bama take half hour to an hour to cover the distance to her home that would normally take only ten minutes?

Bama would dawdle along, watching all the entertaining novelties and oddities in the streets. She would gaze at the shops and the bazaar enjoying the street scenes and so she would take at least an hour to reach home.

4. What was the incident that made Bama laugh as well as feel so provoked and angry?

Bama saw an elderly man of her street carrying a packet of ‘Vadais’ by the strings and wal king gingerly, holding the parcel away from his body. Bama found his manner of carrying the parcel very funny. But her brother explains to her the higher caste people believed that if the lower caste

people touched the parcel it would be polluted. That’s why the elder was carrying it in that manner. This provokes and angers Bama.

1. Zitkala-Sa’s friend Judewin tells her that it is better to submit to authority. What kind of a person do you think Judewin was?

2. Why did Zitkala-Sa start crying in the dining hall?

3. Why does the author feel ‘Spirit tore itself in struggling for its lost freedom, all was useless’?

4.‘Now I was only one of many little animals driven by a herder!’ Explain.

5. When and how did Bama come to know of the discrimination faced by the marginalized people?

6.Why didn’t the author want to her hair to be cut short?

1.Had Bama not been guided properly by her elder brother regarding untouchability, she would have grown up into a complex-torn woman. Do you agree? Justify.

– Bama angry and provoked – Frustration might have lead to open and futile revolt – Timely advice of Annan guides her in right direction – He believe that people of their community should study and outshine others to earn respect of society. Bama follows his timely advice and grows up to be a balanced and well respected individual of the society.

1.   Bama’s brother’s right advice at the right time helped her progress in academics thereby throwing away the chain of untouchability of which dalits like her are victims of. Justify with reference to ‘Memories of Childhood’

2.   Both Bama and Zitkala-Sa are victims of discrimination that is practiced in the society. What

kind of experience did both of them go through?

3.   What are the similarities in  the lives of Bama and Zitkal though they belong to different countries?

5.   Does the twin stories hold any relevance today? Analyse with reference to  the incidents in the story and the present society.