A king once thought that he would never fail if he knew three things. One, what the right time was to begin something. Two, which people he should take advice from. Three, how to decide what the most important thing to do was.

He sent messengers throughout his kingdom. He promised to give a reward of a large sum to the person who answered his three questions.

Answering the second question, they gave top importance to his councilors, or to priests or to doctors or to soldiers.

In reply to the third question, the wise men gave importance to science or fighting, or religious worship.

The king was not satisfied. He went to a hermit in the jungle alone. There he saw the old and weak hermit digging the ground. The king asked his questions but got no answer. Then he took the spade from the hermit and began to work in his place. Several hours passed. It was evening, so the king stopped digging the beds. The king was ready to take leave from the hermit. Just then the hermit told that someone was running towards them.

The king saw a bearded man running towards them. His hands were pressed against his stomach from which blood was oozing. As he reached the king, he fainted and fell to the ground. He had a large wound in his stomach. 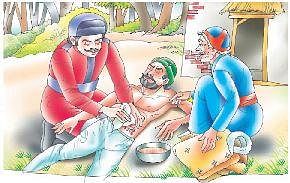 The king washed the wound and compressed it with his handkerchief. At last, the bleeding stopped. The man felt better and asked for water to drink. The king gave him fresh water.

The sun had set by then. The king and the hermit carried the wounded man into the hut and laid him on the bed. The tired king also fell asleep. When he awoke, the bearded man asked to forgive him.

The man was, in fact, the king's enemy. He had followed the king to take revenge on him. He had vowed to kill him. The king had once put his brother to death. The man hid in a bush on the way to the jungle. He came out of his hiding place when the king did not return for long. He got wounded by the king's bodyguards. He would have died if the king had not dressed his wound. He felt grateful to the king who had saved his life. He promised to serve the king as a faithful servant.

The king was happy that he had made peace with his enemy. He forgave the man and promised to give back his property.