The document Summing Amplifier : Applications of Op-amp - CSIR-NET Physical Sciences Physics Notes | EduRev is a part of the Physics Course Physics for IIT JAM, UGC - NET, CSIR NET.
All you need of Physics at this link: Physics

The Summing Amplifier is another type of operational amplifier circuit configuration that is used to combine the voltages present on two or more inputs into a single output voltage. 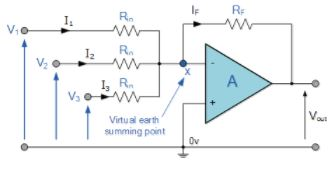 In this simple summing amplifier circuit, the output voltage, ( Vout ) now becomes proportional to the sum of the input voltages, V1, V2, V3, etc. Then we can modify the original equation for the inverting amplifier to take account of these new inputs thus:

However, if all the input impedances, ( Rin ) are equal in value, we can simplify the above equation to give an output voltage of:

This is because the input signals are effectively isolated from each other by the “virtual earth” node at the inverting input of the op-amp. A direct voltage addition can also be obtained when all the resistances are of equal value and Rƒ is equal to Rin.

A Scaling Summing Amplifier can be made if the individual input resistors are “NOT” equal. Then the equation would have to be modified to:

To make the math’s a little easier, we can rearrange the above formula to make the feedback resistor Rƒ the subject of the equation giving the output voltage as:

This allows the output voltage to be easily calculated if more input resistors are connected to the amplifiers inverting input terminal. The input impedance of each individual channel is the value of their respective input resistors, ie, R1, R2, R3 … etc.

Sometimes we need a summing circuit to just add together two or more voltage signals without any amplification. By putting all of the resistances of the circuit above to the same value R, the op-amp will have a voltage gain of unity and an output voltage equal to the direct sum of all the input voltages as shown:

The Summing Amplifier is a very flexible circuit indeed, enabling us to effectively “Add” or “Sum” (hence its name) together several individual input signals. If the inputs resistors, R1, R2, R3 etc, are all equal a “unity gain inverting adder” will be made. However, if the input resistors are of different values a “scaling summing amplifier” is produced which will output a weighted sum of the input signals.

Find the output voltage of the following Summing Amplifier circuit. Using the previously found formula for the gain of the circuit

We can now substitute the values of the resistors in the circuit as follows,

We know that the output voltage is the sum of the two amplified input signals and is calculated as:

Then the output voltage of the Summing Amplifier circuit above is given as -45 mV and is negative as its an inverting amplifier.

So what can we use summing amplifiers for? If the input resistances of a summing amplifier are connected to potentiometers the individual input signals can be mixed together by varying amounts.

For example, measuring temperature, you could add a negative offset voltage to make the output voltage or display read “0” at the freezing point or produce an audio mixer for adding or mixing together individual waveforms (sounds) from different source channels (vocals, instruments, etc) before sending them combined to an audio amplifier.

Another useful application of a Summing Amplifier is as a weighted sum digital-to-analogue converter. If the input resistors, Rin of the summing amplifier double in value for each input, for example, 1kΩ, 2kΩ, 4kΩ, 8kΩ, 16kΩ, etc, then a digital logical voltage, either a logic level “0” or a logic level “1” on these inputs will produce an output which is the weighted sum of the digital inputs. Consider the circuit below.

Of course this is a simple example. In this DAC summing amplifier circuit, the number of individual bits that make up the input data word, and in this example 4-bits, will ultimately determine the output step voltage as a percentage of the full-scale analogue output voltage.