Chapter 1 IntroductionSURVEYINGSurveying is the process of determining relative positions of different objects on the surface of the earth by measuring horizontal distances between them and preparing a map to any suitable scale. Measurements are taken in a horizontal plane.

•This is an exhaustive preliminary survey of the land to be surveyed. It may be either ground reconnaissance or aerial reconnaissance survey.• Reconnaissance is made on arrival to site during which an overall picture or view of the area is obtained. The most suitable position of stations is selected, the purpose of the survey and the accuracy required will be drawn, and finally, the method of observation will be established.

Objectives of reconnaissance:1. To ascertain the possibility of building or constructing route or track through the area.2. To choose the best one or more routes and record on a map3. To estimate probable cost and draft a report.

Principle of working from whole to part:-It is a fundamental rule to always work from the whole to the part. This implies a      precise control surveying as the first consideration followed by subsidiary detail     surveying.

-This surveying principle involves laying down an overall system of stations whose positions are fixed to a fairly high degree of accuracy as control, and then the survey of details between the control points may be added on the frame by less elaborate methods.-Once the overall size has been determined, the smaller areas can be surveyed in the knowledge that they must (and will if care is taken) put into the confines of the main overall frame.-Errors which may inevitably arise are then contained within the framework of the control points and can be adjusted to it.The surveying may primarily be divided into two divisions :1. Plane surveying2. Geodetic surveying1. Plane surveying : The surveys in which earth surface is assumed as a plane and the curvature of the earth is ignored, are known as plane surveys.

MAP : The representation of the earth surface on a small scale, is called a map.

Classification of Scales : The scales drawn on the maps or plans, may be classified as:(i) Plain scale(ii) Diagonal scale(iii) Scale of chords(iv) Vernier scale-Plain Scale : A plane scale is one on which it is possible to measure only two dimensions, i.e. metres and decimetre, kilometres and hectametres, miles and furlongs etc.

(i) Diagonal scales : On a diagonal scale, it is possible to measure three dimensions such as kilometres, hectametres and decametres; or yards, feet and inches etc.

Least count of a vernier is equal to the difference between the smallest division on the vernier scale.-Least count (L-C) =

Error Due to Use of the Wrong Scale

Error Due to Incorrect Length of Chain or Type

Case (b): In case of volume 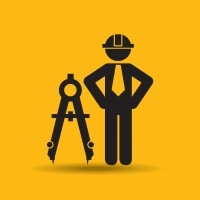