METHOD OF CURVE RANGE :1. Linear or chain and tape method and 2. Angular or instrumental methods. 

(i) Having fixed the direction of the tangents, produce them so as to meet at the point B(ii) Find the deflection angle by theodolite.(iii) Calculate the tangent length BT1 = BT2 = R tan OB = R sec f/2

(iv) Locate the point T1 and T2 on back tangent and forward tangent.

1. Offsets from the Long Chord : 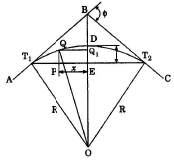 (i) Perpendicular off sets 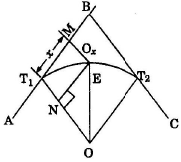 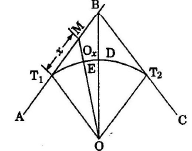 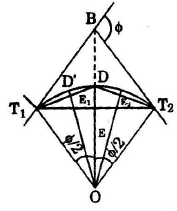 Let T1T2 be the long chord of a curve whose angle of deflection is f.Divide T1T2 at C. Joint OE and produce it to intersect the curve at Now DE = OD-OE = R-R cos f/2 Oo = DE = R (1-cos f/2) Now consider T1D and T2D independent portions of the curve having T1D and T2D as long chord. it can be proved that offset E1D1 and E2D2 are each equal to R (1–cos f/4).By further successive bisection of the chords T1D1, D1D1, DD2 and D2T2 we may obtain the locations of other points on the curve.

4. OFFSET FROM CHORD PRODUCED:This method is commonly adopted when a theodolie is not available and it is necessary to set out a curve only with a chain or a tape. The curve is divided into a number of chords normally 20 or 30 m in length. As continuous chainage is required along the curve, two sub-chords generally occurs one at the beginning and the other at the end of the curve.Offsets from chords produced may be computed with the help of the formula derived under : Putting the value of d and d1 in equation (iii)

Similary we get the value of third offset O3 i.e, O3

where C is the length of the normal chord

The offsets for the last sub chord Cn