Some of the emerging technologies in utilization of synthesis gas and methane for the production of petrochemicals, are Fischer-Tropsch synthesis, oxidative coupling of methane with chlorine to yield ethane and ethylene, methanol to olefin technology (MTO). Fischer-Tropsch synthesis is being studied in great detail world over and it is promising to be a future technology for manufacture of olefins from synthesis gas. CO that can be separated from synthesis gas either by cryogenic or by pressure swing adsorption is a promising feedstock for production of a variety of products. Product profile of methane, synthesis gas and CO based building blocks are given in Figure M-VII 4.1. 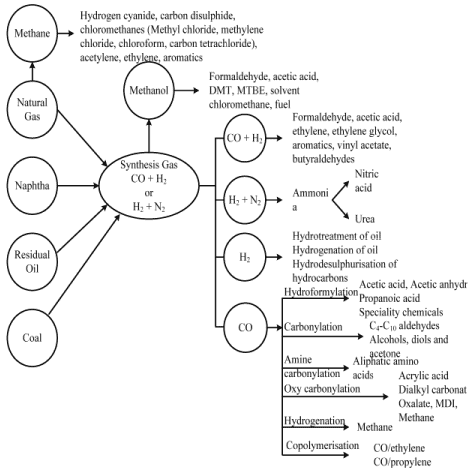 Petrochemical derivatives based on synthesis gas and carbon monoxide have experienced steady growth due to large scale utilization of methanol and development of a carbonylation process for acetic acid and Oxo synthesis process for detergents, plasticizers, and alcohols. Recent market studies show that there will be a dramatic increase in demand of CO and syngas derivatives . Methanol is the largest consumer of synthesis gas. The reformed gas is to meet certain requirements with regard to its composition. It is characterized by the stoichiometric conversion factor, which differs from case to case

Various raw materials for synthesis gas production are natural gas, refinery gases, naphtha, fuel oil/residual heavy hydrocarbons and coal. Although coal was earlier used for production of synthesis gas, it has now been replaced by petroleum fractions and natural gas. Petrocoke is the emerging source for Synthesis gas. Coal is again getting importance alone are with combination of petroleum coke. Various Routes for Synthesis gas and Ammonia and Methanol manufacture is shown in Figure M-VII 4.2. Reactions in the manufacture of synthesis gas by Steam reforming and Partial oxidation  in Table M-VII 4.2 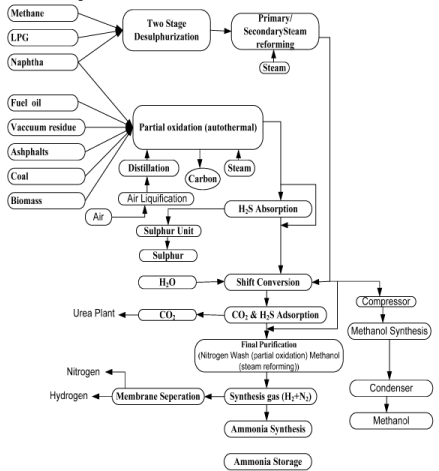 Figure M-VII 4.2: Various Routes for Synthesis gas and Ammonia and

Table M-VII 4.2: Reactions in the manufacture of synthesis gas by Steam reforming and Partial oxidation

Methanol
Methanol was first obtained by Robert Boylein in the year 1661 through rectification of crude wood vinegar over milk of lime and was named adiaphorous spiritusliglorum. The term methyl was introduced in chemistry in 1835. Methanol is one of the largest volume chemicals produced in the world. Methanol consumption can be separated into three end use categories – chemical feedstock, methyl fuels, and miscellaneous uses. About 71% of the current global consumption of methanol is in the production of formaldehyde, acetic acid, methyl methacrylate, and dimethyl terephthalate. The global methanol industry has experienced very fundamental and structural changes and has settled down considerably.
Demand changes in key methanol derivatives may adversely affect future demand in case of methanol. Product profile of methanol is given in Table M-VII 4.3. Globally the demand is expected to grow exponentially, not only caused by growing internal market of traditional applications but accelerated by new applications such as directing blending with gasoline, methanol to olefins (e.g. propylene) and dimethyl ether . Global demand for methanol will reach 122.6 million tones by 2020. Global methanol demand was 26.6 million tons and 44.9 million tones in 2000 and 2010 respectively . Present capacity of methanol in India is 4.65 lakh tones. Capacity for methanol and trends in production of methanol is given in Table M-VII 4.4, Table M-VII 4.5 and Table M-VII 4.6.
Table M-VII 4.3: Product Profile of Methanol

Table M-VII 4.4: Profile of Methanol production and Consumption Pattern in India Capacity for Methanol in India

From the early 1800s until 1920s, the distillation of wood to make wood alcohol was the source of Methanol. The most common industrially favored method for the production of methanol was first developed by BASF in 1923 in Germany from synthesis gas utilising high pressure process using zinc-chromic oxide catalyst. However, due to high capital and compression energy costs compounded by poor catalyst activity, high-pressure process was rendered obsolete when ICI in the year 1966 introduced a low-pressure version of the process at 5-10 MPa and 210-270oC, with a new copper-zinc oxide based catalyst of high selectivity and stability.

Process steps involved in the production of methanol are:

Figure M-VII 4.3 illustrate the production of methanol  from steam reforming of natural gas and naphtha. 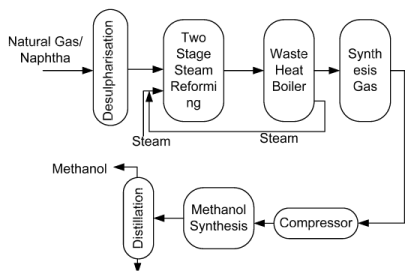 The major reactions take place during methanol synthesis converter can be described by following equilibrium reactions:

The first two reactions are exothermic and proceed with reduction in volume. In order to achieve a maximum yield of methanol and a maximum conversion of synthesis gas, the process must be effected at low temperature and high pressure.

After cooling to ambient temperature, the synthesis gas is compressed to 5.0-10.0 MPa and is added to the synthesis loop which comprises of following items – circulator, converters, heat exchanger, heat recovery exchanger, cooler, and separator. The catalyst used in methanol synthesis must be very selective towards the methanol reaction, i.e. give a reaction rate for methanol production which is faster than that of competing