Indole is a very weak base like pyrrole because of the involvement of lone pair of nitrogen in aromatization. However, in dilute solutions it undergoes protonation of nitrogen to give indolium cation in which the aromaticity of benzene ring is retained (eq. 41). Indole does not undergo easy alkylation of nitrogen unlike amines for the same reason.

(i) Electrophilic Substitution of Indole: The electron density of carbons in heterocyclic ring of indole is higher due to contribution from nitrogen as in case of pyrrole. Therefore, the heterocyclic ring of indole is more reactive towards electrophiles compared to its benzene ring. The electrophilic substitution in indole takes place at C-3 and not at C-2 as in pyrrole. This can be explained from the following observations. Electrophilic attack at C-2 and C-3 gives different intermediates as shown below (Scheme 6): (ii) Oxidation and Reduction of Indole: Indoles are easily oxidized by air and give a mixture of products. The C2-C3 double bond of indole is labile and can be easily cleaved by ozonolysis, peracids and sodium hypoiodate etc. Indole gives a resinous material whereas 3-substituted or 2,3-disubstituted indoles undergo C2-C3 cleavage as in case of ozonolysis (eqs. 42-43).

(iii) Reaction with Carbenes: Indole and substituted indoles undergo addition of dihalocarbene on electron rich C2-C3 double bond to give an intermediate which undergoes ring expansion to give 3-chloroquinoline or 3-membered ring cleavage to give 3-substituted indole derivative (eq. 46).

Reactions of Quinoline and Isoquinoline

Quinolines and isoquinolines behave similar to pyridine. Both are weakly basic and undergo protonation of nitrogen without affecting the aromaticity of the ring. Quaternary ammonium salts are formed on nitrogen by alkylation. 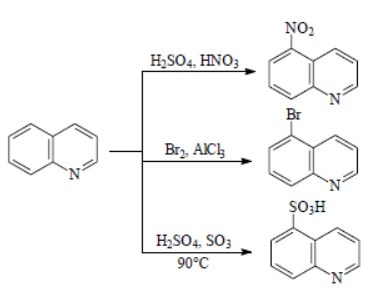 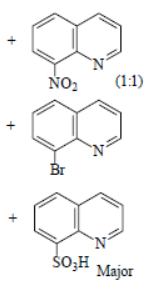 Isoquinoline can also be converted to 1,2-dihydro or 1,2,3,4-tetrahydroisoquinoline with diethyl aluminium hydride and sodium-ethanol, respectively (eq. 53).