Now we determine the variances of

under this linear  trend. 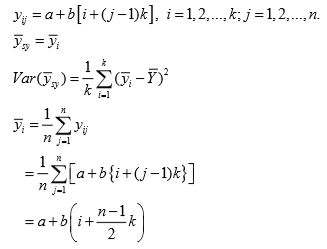 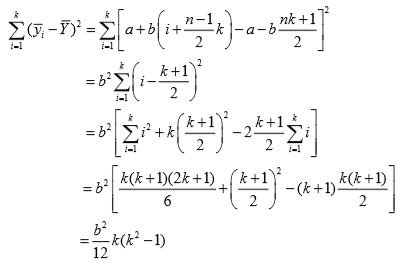 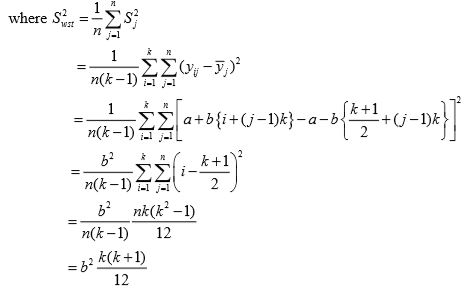 If k is large, so that 1/k is negligible, then comparing 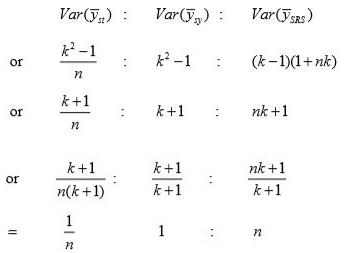 So stratified  sampling is best for linearly trended population.  Next  best is systematic sampling.

As such there is only one cluster, so variance in principle, cannot be estimated. Some approximations have been suggested.

1. Treat systematic sample as if it were a random sample. In this case, an estimate of variance is

This estimator under-estimates the true variance.

2. Use of successive differences of the values gives the estimate of variance as

This estimator is a biased estimator of true variance.

4. The interpenetrating subsamples can be utilized by dividing the sample into C groups each of

is a biased estimator of

An unbiased estimator of

is the total of values of the ith column.

Now we consider another procedure which is opted when N ≠ nk.

When population size  N is not expressible as the product of  n and  k , then let

Then take the sampling interval as

denotes the largest integer contained in

number of units expected in sample

Then sample sizes would be

This can be verified from the following example:

We now prove the following theorem which shows how to obtain an unbiased estimator of the population mean when  N ≠ nk.

Theorem: In systematic sampling with sampling interval k from a population with size  N ≠ nk , an unbiased estimator of the population mean

Now, each unit occurs in only one of the k possible systematic samples. Hence

which on substitution in

In other words, if  i is a number selected at random from 1 to N , then the circular systematic sample consists of units  with serial numbers

This sampling scheme ensures equal probability of inclusion in the sample for every unit.

This procedure is illustrated diagrammatically in following  figure. Clearly, each unit of the population occurs in  n of the N possible circular systematic sample means.  Hence,

which on substitution in E (

What to do when  N ≠ nk One of the following possible procedures may be adopted  when  N ≠ nk.

(i) Drop one unit at random if sample has (n + 1) units.(ii) Eliminate some units so that N = nk .(iii) Adopt circular systematic sampling scheme.(iv) Round off the fractional interval k .