The first steam-powered machine was built in 1698 by the English military engineer Thomas Savery (c. 1650-1715). His invention, designed to pump water out of coal mines, was known as the Miner's Friend. The machine, which had no moving parts, consisted of a simple boiler - a steam chamber whose valves were located on the surface - and a pipe leading to the water in the mine below. Water was heated in the boiler chamber until its steam filled the chamber, forcing out any remaining water or air. The valves were then closed and cold water was sprayed over the chamber. This chilled and condensed the steam inside to form a vacuum. When the valves were reopened, the vacuum sucked up the water from the mine, and the process could then be repeated.A few years later, an English engineer named Thomas Newcomen (1663-1729) improved the steam pump. He increased efficiency by setting a moving piston inside a cylinder, a technique still in use today. A cylinder - a long, thin, closed chamber separate from the boiler - replaced the large, open boiler chamber. A piston - a sliding piece that fits in the cylinder - was used to create motion instead of a vacuum. Steam filled the cylinder from an open valve. When filled, the cylinder was sprayed with water, causing the steam inside to condense into water and create a partial vacuum. The pressure of the outside air then forced the piston down, producing a power stroke. The piston was connected to a beam, which was connected to a water pump at the bottom of the mine by a pump rod. Through these connections, the movement of the piston caused the water pump to suck up the water.The most important improvement in steam engine design was brought about by the Scottish engineer James Watt (1736-1819). He set out to improve the performance of Newcomen's engine and by 1769 had arrived at the conclusion: if the steam were condensed separately from the cylinder, the cylinder could always be kept hot. That year he introduced the design of a steam engine that had a separate condenser and sealed cylinders. Since this kept the heating and cooling processes separate, his machine could work constantly, without any long pause at each cycle to reheat the cylinder. Watt's refined steam engine design used one-third less fuel than a comparable Newcomen engine.Over the next 15 years, Watt continued to improve his engine and made three significant additions. He introduced the centrifugal governor, a device that could control steam output and engine speed. He made the engine double-acting by allowing steam to enter alternately on either side of the piston. This allowed the engine to work rapidly and deliver power on the downward and upward piston stroke. Most important, he attached a flywheel to the engine.Flywheels allow the engine to run more smoothly by creating a more constant load, and they convert the conventional back-and-forth power stroke into a circular (rotary) motion that can be adapted more readily to power machinery. By 1790, Watt's improved steam engine offered a powerful, reliable power source that could be located almost anywhere. It was used to pump bellows for blast furnaces, to power huge hammers for shaping and strengthening forged metals and to turn machinery at textile mills. More than anything, it was Watt's steam engine that speeded up the Industrial Revolution both in England and the rest of the world.Steam was successfully adapted to powerboats in 1802 and railways in 1829. Later, some of the first automobiles were powered by steam. In the 1880s, the English engineer Charles A. Parsons (1854-1931) produced the first steam turbine, a new steam technology that was more efficient and which enabled the steam engine to evolve into a highly sophisticated and powerful engine that propelled huge ships and ran turbogenerators that supplied electricity.Once the dominant power source, steam engines eventually declined in popularity as other power sources became available. Although there were more than 60,000 steam cars made in the United States between 1897 and 1927, the steam engine eventually gave way to the internal combustion engine as a power source for vehicles.Questions 1-7: Match each statement with the correct person A-D. Write the correct letter A, B, C, or D in blanks 1-7 on your answer sheet.

Questions 8-12: Complete the blanks in table below. Choose NO MORE THAN THREE WORDS from the passage for each answer. 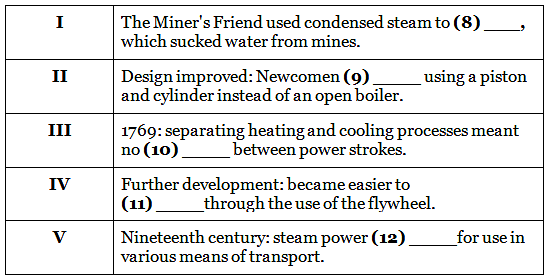 His invention was the first to use moving parts. - (B)

His invention allowed steam power to be converted into electric power. - (D)

His invention was the single biggest step in development. - (C)

His invention was the single biggest step in development. - (C)

His invention was the first continuous power source. - (C)

His invention first used a method people still use now. - (B)

His invention allowed a much greater degree of control. - (C)

I .The Miner's Friend used condensed steam to (form a vacuum), which sucked water from mines.

II. Design improved: Newcomen (increased efficiency) using a piston and cylinder instead of an open boiler.

IV. Further development: became easier to (power machinery) through the use of the flywheel.