The document Tangents at the Origin JEE Notes | EduRev is a part of the JEE Course Mathematics (Maths) Class 12.
All you need of JEE at this link: JEE

B. Tangents at the Origin

If a curve passing through the origin be given by a rational integral algebraic equation, the equation of the tangent (or tangents) at the origin is obtained by equating to zero the terms of the lowest degree in the equation. Note : here that we have not actually found the intersection point but geometrically we can see that the curves intersect.

If angle of intersection is θ, then tanθ

Differentiating both sides w.r.t. x, we get

which is independent of x and y..

Slope of tangent to curve (i),

Slope of tangent to curve (ii),

Ex.16 What should be the value of n in the equation of curve y = a1 - n. xn, so that the sub-normal may be of constant length ?

Differentiating both sides w.r.tx, we get

Ex.17 If the relation between sub-normal SN and sub-tangent ST at any point S on the curve

(D) none of these

show that sum of lengths of tangent & subtangent at any point is proportional to coordinates of point of tangency.

Ex.19 Show that the segment of the tangent to the curve y =

contained between the y-axis and point of tangency has a constant length.

Ex.20 For what values of c does the equation ln x = cx2 have exactly one solution ?

Let's start by graphing y = In x and y = cx2 for various values of c. We know that for c * 0, y = cx2 is a parabola that opens upward if c > 0 and downward if c < 0. Figure 1 shows the parabolas y = cx2 for several positive values of c. Most of them don't intersect y = In x at all and one intersect twice. We have the feeling that there must be a value of c (somewhere between 0.1 and 0.3) for which the curves intersect exactly once, as in Figure 2.

To find that particular value of c, we let 'a' be the x-coordinate of the single point of intersection. In other words, In a = ca2, so 'a' is the unique solution of the given equation. We see from Figure 2 that the curves just touch, so they have a common tangent line when x = a. That means the curves y = In x and y=cx2 have the same slope when x = a. Therefore 1/a = 2ca 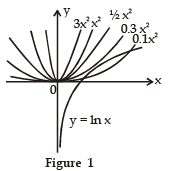 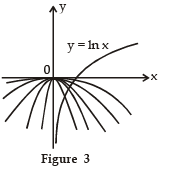 Ex.21 The set of values of p for which the equation px2 = ln x possess a single root is

⇒ the curves touch each .

Sol. Note that C1 is a semicircle and C2 is a rectangular hyperbola.

Sol. We first draw a diagram and label it as in Figure 1. Let x feet be the distance from the bottom of the ladder to the wall and y feet the distance from the top of the ladder to the ground. Note that x and y are both function of t (time). We are given that dx/dt = 1 ft/s and we are asked to find dy/dt when x = 6 ft (see Figure 2). In this problem, the relationship between x and y is given by the Pythagorean Theorem : x2 + y2 = 100

Differentiating each side with respect to t using the Chain Rule, we have

and solving this equation for the desired rate, we obtain

Ex.25 A water tank has the shape of an inverted circular cone with base radius 2 m and height 4 m. If water is being pumped into the tank at a rate of 2 m3/min, find the rate at which the water level is rising when the water is 3 m deep.

We first sketch the cone and label it as in Figure. Let V, r, and h be the volume of the water, the radius of the surface, and the height at time t, where t is measured in minutes.

We are given that dV/dt = 2m3/min and we are asked to find dh/dt when h is 3 m. The quantities V and h are related by the equation V = 1/3pr2hBut it is the very useful to express V as a function of h alone. 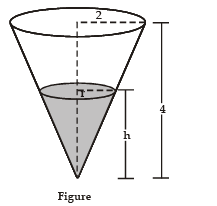 In order to eliminate r, we use the similar triangles in Figure to write

and the expression for V becomes

Differentiating each side with respect to t, we get dx/dt = 20sec2 θ dθ/dt

Ex.27 Two men A and B start with velocities v at the same time from the junction of two roads inclined at 45º to each other. If they travel by different roads, find the rate at which they are being separated.

Let L and M be the positions of men A and B at any time t,

∴ they are being separated from each other at the rate

Ex.28 A variable triangle ABC in the xy plane has its orthocentre at vertex 'B', a fixed vertex 'A' at the origin & the third vertex 'C' restricted to lie on the parabola y =