Q1. Write one distinction between dissolution of partnership and dissolution of firm? (1 mark)Q2. Hema and Garima were partners in a firm sharing profits in the ratio of 3:2 . On March 31, 2015, their Balance Sheet was as follows:

On the above date the firm was dissolved. The various assets were realized and liabilities were settled as under:(i) Garima agreed to pay her husband’s loan.(ii) Leasehold Premises realized 1,50,000 and Debtors 2,000 less.(iii) Half the creditors agreed to accept furniture of the firm as full settlement of their claim and remaining half agreed to accept 5% less.(iv) 50% Stock was taken over by Hema on cash payment of 90,000 and remaining stock was sold for 94,000.(v) Realisation expenses of 10,000 were paid by Garima on behalf of firm.(vi) Pass necessary journal entries for the dissolution of the firm. (6 mark)Q3. Parul, Payal and Pooja are partners. They decided to dissolve their firm. Pass necessary Journal entries for the following after various Assets (other than Cash and Bank) and the third party liabilities have been transferred to Realisation Account:(a) There were total Debtors of Rs. 76,000. A Provision of Bad and Doubtful Debts also stood in the books at Rs. 6,000. Rs. 12,000 Debtors proved bad and rest paid the amount due.(b) Parul agreed to pay off her husband's loan of Rs. 7,000 at a discount of 5%.(c) The book value of assets (other than cash and bank) transferred to Realization Account is Rs. 1,00,000. 50% of the assets are taken over by a partner pooja, at a discount of 20%; 40% of the remaining assets are sold at a profit of 30% on cost; 5% of the balance being obsolete, realized nothing and remaining assets are handed over to a Creditor, in full settlement of his claim. (d) The firm had a debit balance of Rs. 27,000 in the Profit and Loss Account on the date of dissolution. ( e ) Pooja paid realisation expenses of Rs. 15,000 out of her pocket and she was to get a remuneration of Rs. 18,000 for completing the dissolution process. (5 mark)Q4. Pass the necessary entries at the dissolution a partnership firm of Zulu and Bholu a. Realization expenses amounted to Rs.5000 were paid by the partner Bholu. b. Bholu was entitled a commission of Rs.2000 for the realization expenses which were Rs.5500. c. Realization expenses were Rs.4000 paid by the firm on behalf of Bholu who was given a commission of Rs.3000 for the same. d. Zulu was paid a commission of Rs.600 for the realization expenses and the actual expenses were Rs.480 paid by zulu by his private funds. e. Zulu decided took over the business in which assets realized Rs.60000 and liabilities amounted to Rs.10000. f. Loan from zulu to the firm was Rs.9000 and his capital account shows a debit balance of Rs.1000.    (6 mark)Q5. Romesh and Bhawan were in partnership sharing profit and losses as 3:2. Their Balance Sheet as on March 31, 2012, was as follows:Balance Sheet of Romesh and Bhawan as on March 31, 2012

They decided to dissolve the firm. The following information is available:1. Debtors were recovered 5% less. Stock was realised at books value and building was sold for Rs.51,000,2. It is found that investment not recorded in the books amounted to Rs.10,000. The same were accepted by one creditor for this amount and other Creditors were paid at a discount of 10%. Bills payable were paid full,3. Romesh took over some of the Investments at Rs.8,100 (book value less 10%). The remaining investment were taken over by Bhawan at 90% of the book value less Rs.900 discount,4. Bhawan paid bank loan along with one year interest at 6% p.a, 5. An unrecorded liability of Rs.5,000 paid. Pass entires for dissolution. (6 mark)Q6. 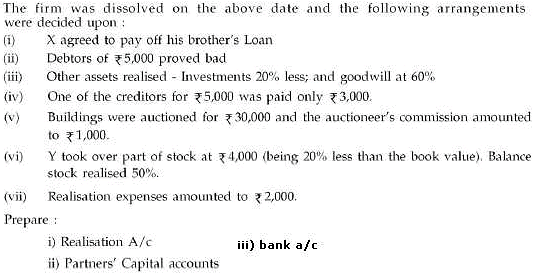