1. Can you explain boundary value analysis?

In some projects there are scenarios where we need to do boundary value testing. For instance, let's say for a bank application you can withdraw a maximum of 25000 and a minimum of 100. So in boundary value testing we only test the exact boundaries rather than hitting in the middle. That means we only test above the max and below the max. This covers all scenarios. The following figure shows the boundary value testing for the bank application which we just described. TC1 and TC2 are sufficient to test all conditions for the bank. TC3 and TC4 are just duplicate/redundant test cases which really do not add any value to the testing. So by applying proper boundary value fundamentals we can avoid duplicate test cases, which do not add value to the testing. 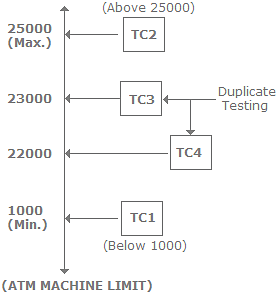 2. Can you explain equivalence partitioning? 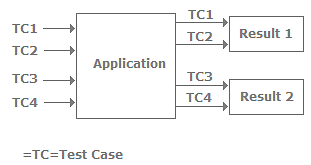 So apply the test below to see if it forms an equivalence class or not:

3. Can you explain random/monkey testing?

Random testing has the following weakness:

This kind of testing is really of no use and is normally performed by newcomers. Its best use is to see if the system will hold up under adverse effects.


4. What are semi-random test cases?

5. Can you explain a pair-wise defect?

Orthogonal array is a two-dimensional array in which if we choose any two columns in the array and all the combinations of numbers will appear in those columns. The following figure shows a simple L9(34) orthogonal array. In this the number 9 indicates that it has 9 rows. The number 4 indicates that it has 4 columns and 3 indicates that each cell contains a 1, 2, and 3. Choose any two columns. Let's choose column 1 and 2. It has (1,1), (1,2), (1,3), (2,1), (2,2), (2,3), (3,1), (3,2), (3,3) combination values. As you can see these values cover all the values in the array. Compare the values with the combination of column 3 and 4 and they will fall in some pair. This is applied in software testing which helps us eliminate duplicate test cases. 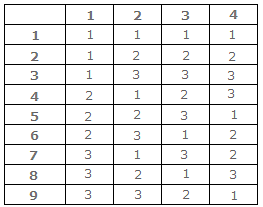 6. What is negative and positive testing?

A negative test is when you put in an invalid input and receive errors.

A positive test is when you put in a valid input and expect some action to be completed in accordance with the specification. 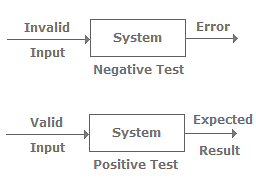 7. How did you define severity ratings in your project?

There are four types of severity ratings as shown in the table: 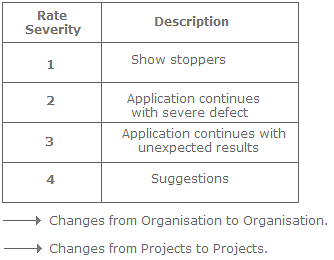 8. Can you explain exploratory testing?

9. Can you explain decision tables?

As the name suggests they are tables that list all possible inputs and all possible outputs. A general form of decision table is shown in the following figure. 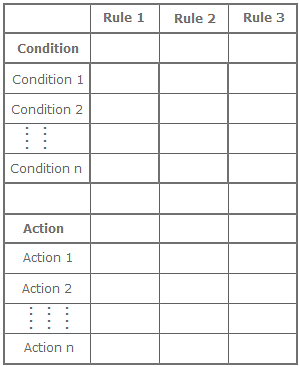