The document The Direct Stiffness Method: Beams - 2 GATE Notes | EduRev is a part of the GATE Course Structural Analysis.
All you need of GATE at this link: GATE For the case of continuous beam, the x - and x'- axes are collinear and other axes (y and y', z and z') are parallel to each other. Hence it is not required to transform member stiffness matrix from local co-ordinate system to global coordinate system as done in the case of trusses. For obtaining the global stiffness matrix, first assume that all joints are restrained. The node and member numbering for the possible degrees of freedom are shown in Fig 27.6b. The continuous beam is divided into two beam members. For this member there are six possible degrees of freedom. Also in the figure, each beam member with its displacement degrees of freedom (in local co ordinate system) is also shown. Since the continuous beam has the same moment of inertia and span, the member stiffness matrix of element 1 and 2 are the same. They are,

Consider a continuous beam ABC as shown in Fig. 27.7.

We have two types of load: member loads and joint loads. Joint loads could be handled very easily as done in case of trusses. Note that stiffness matrix of each member was developed for end loading only. Thus it is required to replace the member loads by equivalent joint loads. The equivalent joint loads must be evaluated such that the displacements produced by them in the beam should be the same as the displacements produced by the actual loading on the beam. This is evaluated by invoking the method of superposition. 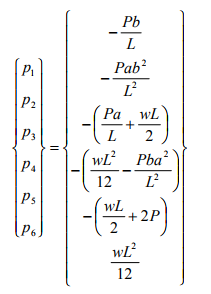 After establishing the global stiffness matrix and load vector of the beam, the load displacement relationship for the beam can be written as,

Let R1, R3 and R5 be the reactions along the constrained degrees of freedom as shown in Fig. 27.9a. Since equivalent joint loads are directly applied at the supports, they also need to be considered while calculating the actual reactions. Thus, From the method of superposition, In the next lesson few problems are solved to illustrate the method so far discussed.