The document The Direct Stiffness Method: Truss Analysis - 3 GATE Notes | EduRev is a part of the GATE Course Structural Analysis.
All you need of GATE at this link: GATE

Number all the joints and members of a plane truss. Also indicate the degrees of freedom at each node. In a plane truss at each node, we can have two displacements. Denote unknown displacements by lower numbers and known displacements by higher numbers as shown in Fig. 24.4. In the next step evaluate member stiffness matrix of all the members in the global co ordinate system. Assemble all the stiffness matrices in a particular order, the stiffness matrix K for the entire truss is found. The assembling procedure is best explained by considering a simple example. For this purpose consider a two member truss as shown in Fig. 24.11. In the figure, joint numbers, member numbers and possible displacements of the joints are shown. 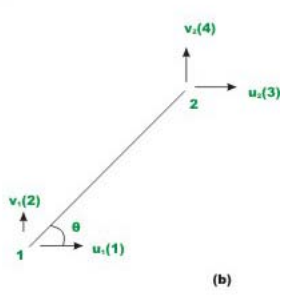 The area of cross-section of the members, its length and its inclination with the x - axis are also shown. Now the member stiffness matrix in the global co- ordinate system for both the members are given by

The assembled stiffness matrix is of the order 6×6 . Hence, it is easy to visualize assembly if we expand the member stiffness matrix to 6×6 size. The missing columns and rows in matrices k1 and k2 are filled with zeroes. Thus,

If more than one member meet at a joint then the stiffness coefficients of member stiffness matrix corresponding to that joint are added.

After evaluating global stiffness matrix of the truss, the load displacement equation for the truss is written as,

Example 24.1Analyse the two member truss shown in Fig. 24.12a. Assume EA to be constant for all members. The length of each member is 5m. The co-ordinate axes, the number of nodes and members are shown in Fig.24.12b. The degrees of freedom at each node are also shown. By inspection it is clear that the displacement u3 = u4 = u5 = u6 = 0. Also the external loads are

Again stiffness matrix for the unconstrained degrees of freedom is,

The answer can be verified by equilibrium of joint 1. Also,

Now force in each member is calculated as follows,