Calculate the support reactions in the continuous beam ABC (see Fig. 9.6a) having constant flexural rigidity EI throughout, due to vertical settlement of the support B by 5 mm as shown in the figure. E = 200 GPa and 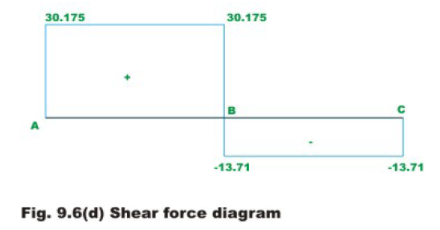 As the given beam is statically indeterminate to second degree, choose reaction at B(R1) and C(R2) as the redundants. In this case the cantilever beam AC the basic determinate beam (primary structure). On the determinate beam only redundant reactions are acting. The first column of flexibility matrix is evaluated by first applying unit load along the redundant R1 and determining deflections a11 and a21 respectively as shown in Fig. 9.6b.

Simply by applying the unit load in the direction of redundant R2, one could evaluate flexibility coefficients a12 and a22 (see Fig. 9.6c).

The compatibility condition for the problem may be written as,

The redundant reactions are,

Substituting the values of E and I in the above equation, the redundant reactions are evaluated.

R1 acts downwards and R2 acts in the positive direction of the reaction i.e upwards. The remaining two reactions R3 and R4 are evaluated by the equations of equilibrium.

The shear force and bending moment diagrams are shown in Figs. 9.6d and 9.6e respectively.

The given beam is statically indeterminate to second degree. Select vertical reactions at B(R1) and C(R2) as redundants. The primary structure in this case is a simply supported beam AD as shown in Fig. 9.7b.

The deflection (ΔL)1 and (ΔL)2 of the released structure are evaluated from unit load method. Thus,

The flexibility matrix is evaluated as explained in the previous example, i.e by first applying unit load corresponding to the redundant and determining deflections a11 and a21 respectively as shown in Fig. 9.7c. Thus,

In this case the compatibility equations may be written as,

Substituting the value of E and I in the above equation,

The shear force and bending moment diagrams are now constructed and are shown in Figs. 9.7e and 9.7f respectively.