Pauli Exclusion Principle:No two electrons can have the same set of quantum numbers. That is, no two electrons can be in the same state.The Austrian physicist Wolfgang Pauli (1900–1958) played a major role in the development of quantum mechanics. He proposed the exclusion principle; hypothesized the existence of an important particle, called the neutrino, before it was directly observed; made fundamental contributions to several areas of theoretical physics; and influenced many students who went on to do important work of their own. 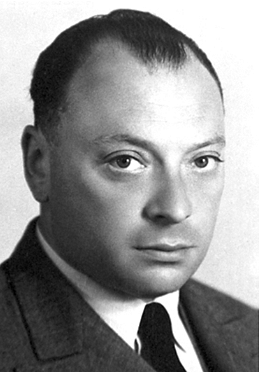 Let us examine how the exclusion principle applies to electrons in atoms. The quantum numbers involved were defined in Quantum Numbers and Rules as n, l,ml, s, and ms. Since s is always 1/2 for electrons, it is redundant to list s, and so we omit it and specify the state of an electron by a set of four numbers (n, l,ml, ms). For example, the quantum numbers (2, 1, 0, -1/2) completely specify the state of an electron in an atom.Since no two electrons can have the same set of quantum numbers, there are limits to how many of them can be in the same energy state. Note that n determines the energy state in the absence of a magnetic field. So we first choose n, and then we see how many electrons can be in this energy state or energy level. Consider the n=1 level, for example. The only value l can have is 0, and thus ml can only be 0. The spin projection ms can be either +1/2 or -1/2, and so there can be two electrons in the n=1 state. One has quantum numbers (1, 0, 0,+1/2), and the other has (1, 0, 0,-1/2). Illustrates that there can be one or two electrons having n=1, but not three.The Pauli exclusion principle explains why some configurations of electrons are allowed while others are not. Since electrons cannot have the same set of quantum numbers, a maximum of two can be in the n=1 level, and a third electron must reside in the higher-energy n=2 level. If there are two electrons in the n=1 level, their spins must be in opposite directions. (More precisely, their spin projections must differ.)

Shells and Subshells:Because of the Pauli exclusion principle, only hydrogen and helium can have all of their electrons in the n=1 state. Lithium has three electrons, and so one must be in the n=2 level. This leads to the concept of shells and shell filling. As we progress up in the number of electrons, we go from hydrogen to helium, lithium, beryllium, boron, and so on, and we see that there are limits to the number of electrons for each value of n. Higher values of the shell n correspond to higher energies, and they can allow more electrons because of the various combinations of l, ml, and ms that are possible. Each value of the principal quantum number n thus corresponds to an atomic shell into which a limited number of electrons can go. Shells and the number of electrons in them determine the physical and chemical properties of atoms, since it is the outermost electrons that interact most with anything outside the atom.The probability clouds of electrons with the lowest value of l are closest to the nucleus and, thus, more tightly bound. Thus when shells fill, they start with l=0, progress to l=1, and so on. Each value of l thus corresponds to a subshell.

The table given below lists symbols traditionally used to denote shells and subshells.

To denote shells and subshells, we write nl with a number for n and a letter for l. For example, an electron in the n=1 state must have l=0, and it is denoted as a 1s electron. Two electrons in the n=1 state is denoted as 1s2. Another example is an electron in the n=2 state with l=1, written as 2p. The case of three electrons with these quantum numbers is written 2p3. This notation, called spectroscopic notation, is generalized as shown in.

Counting the number of possible combinations of quantum numbers allowed by the exclusion principle, we can determine how many electrons it takes to fill each subshell and shell.How Many Electrons Can Be in This Shell?Q 1. List all the possible sets of quantum numbers for the n=2 shell, and determine the number of electrons that can be in the shell and each of its subshells.

Strategy:Given n=2 for the shell, the rules for quantum numbers limit l to be 0 or 1. The shell therefore has two subshells, labeled 2s and 2p. Since the lowest l subshell fills first, we start with the 2s subshell possibilities and then proceed with the 2p subshell.

Solution:It is convenient to list the possible quantum numbers in a table, as shown below. 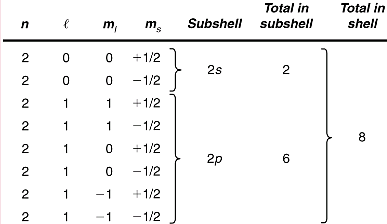 Q.1 How many subshells are in the n=3 shell? Identify each subshell, calculate the maximum number of electrons that will fit into each, and verify that the total is 2n2.

Shell Filling and the Periodic TableShows electron configurations for the first 20 elements in the periodic table, starting with hydrogen and its single electron and ending with calcium. The Pauli exclusion principle determines the maximum number of electrons allowed in each shell and subshell. But the order in which the shells and subshells are filled is complicated because of the large numbers of interactions between electrons. 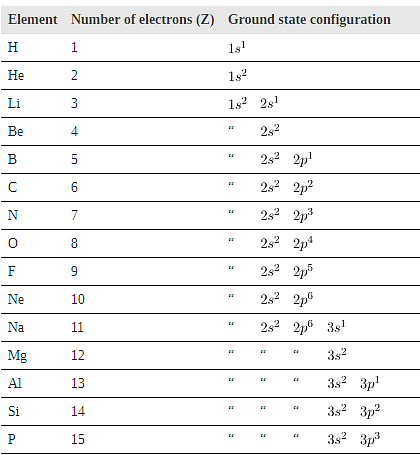 Examining the above table, you can see that as the number of electrons in an atom increases from 1 in hydrogen to 2 in helium and so on, the lowest-energy shell gets filled first—that is, the n=1 shell fills first, and then the n=2 shell begins to fill. Within a shell, the subshells fill starting with the lowest l, or with the s subshell, then the p, and so on, usually until all subshells are filled. The first exception to this occurs for potassium, where the 4s subshell begins to fill before any electrons go into the 3d subshell. The next exception is not shown in; it occurs for rubidium, where the 5s subshell starts to fill before the 4d subshell. The reason for these exceptions is that l=0 electrons have probability clouds that penetrate closer to the nucleus and, thus, are more tightly bound (lower in energy).Shows the periodic table of the elements, through element 118. Of special interest are elements in the main groups, namely, those in the columns numbered 1, 2, 13, 14, 15, 16, 17, and 18. 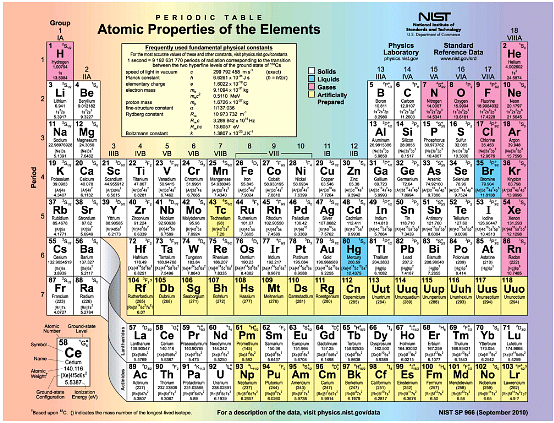 Periodic table of the elements

The number of electrons in the outermost subshell determines the atom’s chemical properties, since it is these electrons that are farthest from the nucleus and thus interact most with other atoms. If the outermost subshell can accept or give up an electron easily, then the atom will be highly reactive chemically. Each group in the periodic table is characterized by its outermost electron configuration. Perhaps the most familiar is Group 18 (Group VIII), the noble gases (helium, neon, argon, etc.). These gases are all characterized by a filled outer subshell that is particularly stable. This means that they have large ionization energies and do not readily give up an electron. Furthermore, if they were to accept an extra electron, it would be in a significantly higher level and thus loosely bound. Chemical reactions often involve sharing electrons. Noble gases can be forced into unstable chemical compounds only under high pressure and temperature.Group 17 (Group VII) contains the halogens, such as fluorine, chlorine, iodine and bromine, each of which has one less electron than a neighboring noble gas. Each halogen has 5 p electrons (ap5 configuration), while the p subshell can hold 6 electrons. This means the halogens have one vacancy in their outermost subshell. They thus readily accept an extra electron (it becomes tightly bound, closing the shell as in noble gases) and are highly reactive chemically. The halogens are also likely to form singly negative ions, such as C1-, fitting an extra electron into the vacancy in the outer subshell. In contrast, alkali metals, such as sodium and potassium, all have a single s electron in their outermost subshell (an s1 configuration) and are members of Group 1 (Group I). These elements easily give up their extra electron and are thus highly reactive chemically. As you might expect, they also tend to form singly positive ions, such as Na+, by losing their loosely bound outermost electron. They are metals (conductors), because the loosely bound outer electron can move freely.Of course, other groups are also of interest. Carbon, silicon, and germanium, for example, have similar chemistries and are in Group 4 (Group IV). Carbon, in particular, is extraordinary in its ability to form many types of bonds and to be part of long chains, such as inorganic molecules. The large group of what are called transitional elements is characterized by the filling of the d subshells and crossing of energy levels. Heavier groups, such as the lanthanide series, are more complex—their shells do not fill in simple order. But the groups recognized by chemists such as Mendeleev have an explanation in the substructure of atoms.