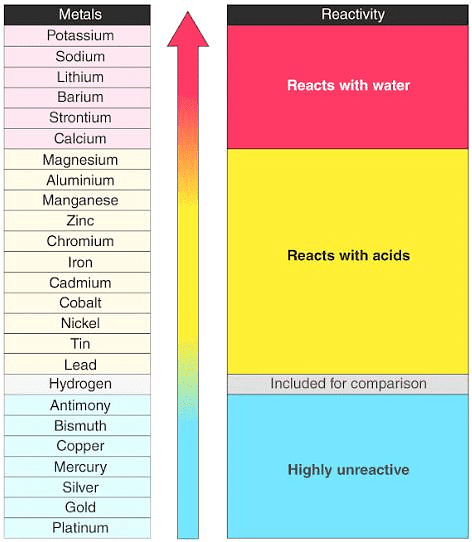 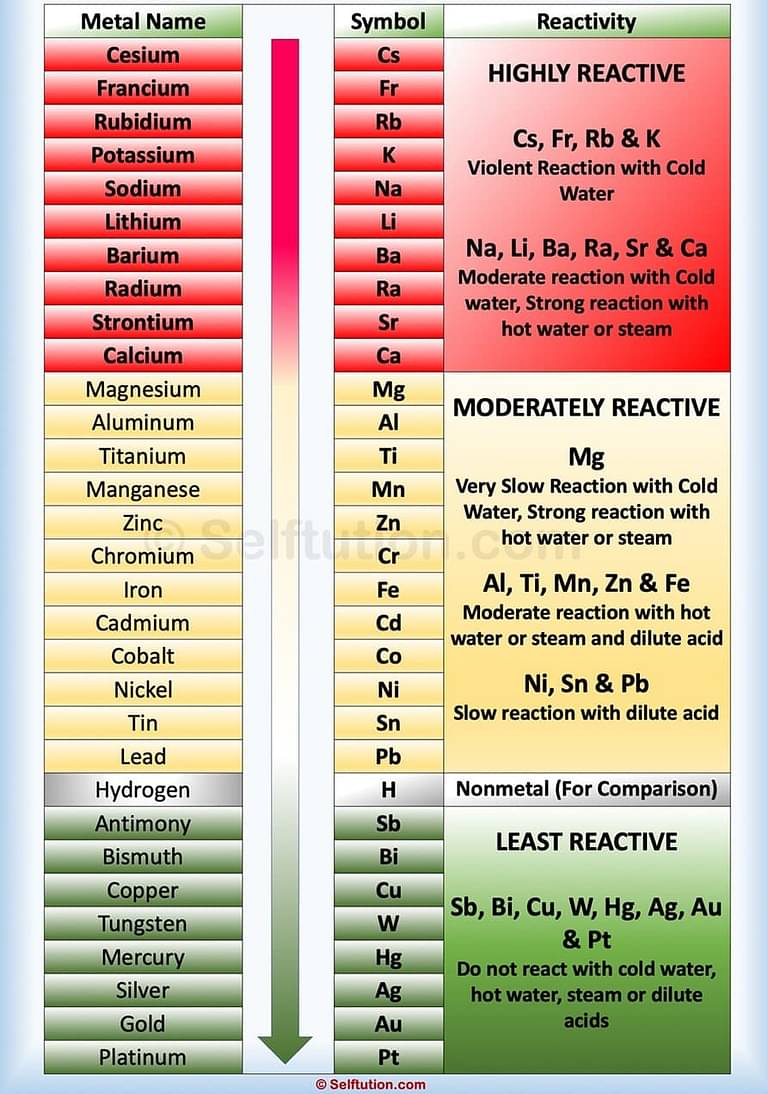 How do metals and non-metals react?

Atoms of elements combine to form stable molecules. The combining power of an atom is expressed as valency. Each atom has a tendency to attain a completely filled valance shell. The noble gases, which have a completely filled valence shell or outermost shell, are very stable. The electronic configuration of noble gases and some metals and non-metals are given in the following table.

Electronic Configuration of Some Elements

It is clear from the above table that except helium, all other noble gases have 8 electrons (octet) in their outermost shell which represent a highly stable electronic configuration. Due to this stable configuration, the noble gases have no tendency to lose or gain electrons. So they exist monoatomic, sodium atom has one electron in its outermost shell. If it loses an electron from its M shell then its L shell becomes the outermost shell. which has stable octet like noble gases. The nucleus of this atom still has 11 protons but the number of electrons are 10. Therefore, if becomes positively charged sodium ion or cation (Na+).

On the other hand chlorine has seven electrons in its outer most shell and it require one more electron to complete its octet. The nucleus of chlorine atom has 17 protons and the number of electrons become 18.This makes chloride ion, Cl- as negatively charged.

So, Na+ and Cl– ions being oppositely charged atoms which attract each other and are held by strong electrostatic forces of attraction to exist as NaCl. In other words, Na+ and Cl– ions are held together by electrovalent or ionic bond.

The formation of one more ionic compound magnesium chloride :The electronic configuration of magnesium (Mg) and chlorine atoms are :Mg12 : 2, 8, 2

Cl17 : 2, 8, 7Magnesium atom has two electrons in its valence shell. It has a tendency to lose both of its electrons to attain the nearest noble gas configuration (i.e. Ne).

On the other hand, chlorine has only one electron less than the nearest noble gas (i.e. Ar) configuration. The magnesium loses its both the valence electrons to two chlorine atoms, each of which is need of one electron to form Cl– ion.

The compounds formed by the transfer of electrons from a metal to a non-metal are known as ionic compound or electrovalent compounds.

Structure of some common ionic compounds

To learn about the properties of ionic compounds. Let us perform the following activity.

Activity: 1.10: 1. Take the samples of NaCl, KCl, BaCl2 and CaCl2.Dissolve small quantity of each solid one by one (a) in water (b) in kerosene and observe.Observations & conclusion:

(a) Each salt is soluble in water.

(b) Each salt is insoluble in kerosene.

2. Take small quantity of each salt one by one on a metallic spatula and heat carefully in the top flame of a bunsen burner. 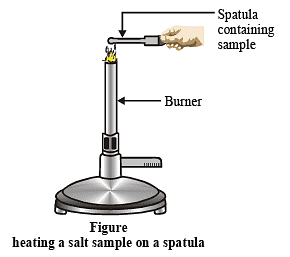 3. Aim: To show that aqueous solution of ionic compounds conduct electricity.Procedure: Dissolve a salt (NaCl) in water and make the experimental set up as shown in figure below: 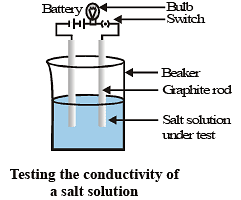 Observations: When the key is pressed it is observed that the bulb glows.

Result: This activity shows the current is passing through the circuit as well as through the aqueous solution.

From the above observations the following general properties are present in the ionic compounds.Physical State

Electrovalent compounds are generally soluble in water and insoluble in solvents such as Kerosene, Petrol, etc.

Ionic compounds have high melting and boiling points due to the strong electrostatic force of attraction between the oppositely charged ions. Therefore, large amount of energy is needed to break these bonds.

Metals occur in the crust of earth in two states: native state and combined state. A metal is said to occur native or free state when a metal is found in nature in the elementary or in combined form or metallic state. The metals at the bottom of the activity series are the least reactive. They are often found in a free state.

Example: Gold, Silver, Copper and Platinum are found in free state because they are very unreactive metals due to which they have no tendency to react with oxygen and not attacked by moisture, CO2 of air or other non-metal. Copper and Silver are also found in the combined state as their suphide or oxide ores.

Distinction between Metals and Non-metals

A metal is said to occur in a combined state if it is found in nature in the form of its compounds. The very reactive metals which have a tendency to react with moisture, oxygen, sulphur, halogens etc. occur in the crust of the earth in the form of their compounds. Such as oxides, sulphides, halides, silicates, carbonates, nitrates, phosphates etc.

Example: Sodium, Potassium, Calcium, Aluminium, Magnesium etc. are very reactive metals. All of these are laying at the top of activity series. These are never found in the free state. The metals in the middle of the activity series such as zinc, iron, lead etc. are moderately reactive. They are found in the earth crust mainly as oxides, sulphide or carbonates. On the basis of reactivity metals are divided into the following three categories:- 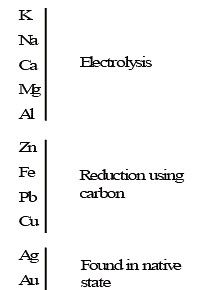 The document The Reactivity Series & Properties of Ionic Compounds Notes | Study Science Class 10 - Class 10 is a part of the Class 10 Course Science Class 10.
All you need of Class 10 at this link: Class 10
Join Course