The document Theorems of Continuity JEE Notes | EduRev is a part of the JEE Course Mathematics (Maths) Class 12.
All you need of JEE at this link: JEE

is also continuous at x = c.

Note that the Intermediate Value Theorem tells that at least one c exists, but it does not give a method for finding c. Such theorems are called existence theorems.

As a simple example of this theorem, consider a person's height. Suppose that a girl is 5 feet tall on her thirteenth birthday and 5 feet 7 inches tall on her fourteenth birthday. Then, for any height h between 5 feet and 7 inches, there must have been a time t when her height was exactly h. This seems reasonable because human growth is continuous and a person's height does not abruptly change from one value to another.

The Intermediate Value Theorem guarantees the existence of at least one number c in the closed interval [a, b]. There may, of course, be more than one number c such that f(c) = k, as shown in Figure 1. A function that is not continuous does not necessarily possess the intermediate value property. For example, the graph of the function shown in Figure 2 jumps over the horizontal line given by y = k and for this function there is no value of c in [a, b] such that f(c) = k. 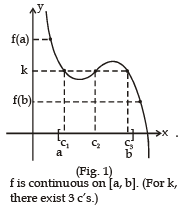 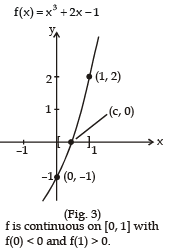 Sol. Note that f is continuous on the closed interval [0, 1]. Because

Ex.11 State intermediate value theorem and use it to prove that the equation

has at least one real root.

c is root of the equation

Ex.12 If f(x) be a continuous function in

then prove that there exists point