Identify the distribution and find its mean and variance.

Solution: The given probability density function may be written as

Solution: Comparing f (x) to the probability densities function of a normal variable x , we find that μ = 10 and σ = 4.

The points of inflexion are given by

Example 17.23: If x is a standard normal variable such that

Example: X follows normal distribution with mean as 50 and variance as 100. What is

Example: If a random variable x follows normal distribution with mean as 120 and standard deviation as 40, what is the probability that P (x ≤ 150 / x > 120)? Given that the area of the normal curve between 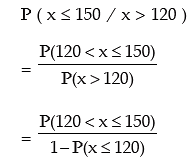 Example: X is a normal variable with mean = 25 and SD 10. Find the value of b such that

Example: In a sample of 500 workers of a factory, the mean wage and SD of wages are found to be ₹ 500 and ₹ 48 respectively. Find the number of workers having wages:

Solution: Let X denote the wage of the workers in the factory. We assume that X is normally distributed with mean wage as ₹ 500 and standard deviation of wages as ₹ 48 respectively.(i) Probability that a worker selected at random would have wage more than ₹ 600

Hence the number of workers having wages less than ₹ 450

(iii) Probability of a worker having wage between ₹548 and ₹ 600 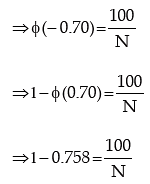 Example: The mean height of 2000 students at a certain college is 165 cms and SD 9 cms. What is the probability that in a group of 5 students of that college, 3 or more students would have height more than 174 cm?Solution: Let X denote the height of the students of the college. We assume that X is normally distributed with mean (σ) 165 cms and SD (μ) as 9 cms. If p denotes the probability that a student selected at random would have height more than 174 cms., then

Example: The mean of a normal distribution is 500 and 16 per cent of the values are greater than 600. What is the standard deviation of the distribution? (Given that the area between

Solution: Let σ denote the standard deviation of the distribution.We are given that 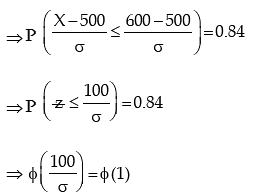 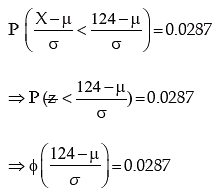 Substituting this value of μ in (3), we get

Thus the coefficient of variation of sales

N(0, 1), then the probability density function of

Some important properties of

are listed below :(i) z has mean, median and mode all equal to zero.(ii) The standard deviation of

is 1. Also the approximate values of mean deviation and quartile deviation are 0.8 and 0.675 respectively.(iii) The standard normal distribution is symmetrical about

(since for a standard normal distribution

denotes the arithmetic mean of a random sample of size n drawn from a normal population then, 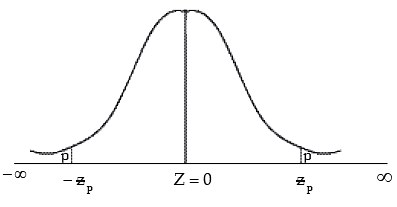