The document Theory - To Prepare Stained Temporary Mount of Onion Peel, Biology, Science, Class 9 Class 9 Notes | EduRev is a part of the Class 9 Course Science Class 9.
All you need of Class 9 at this link: Class 9

Our aim is to prepare stained temporary mounts of onion peel and human cheek cells and to record the observations.

Before exploring the details of cell structure, let's understand the differences in the structure of an onion cell and a human cheek cell.

An onion is a multicellular (consisting of many cells) plant organism.As in all plant cells, the cell of an onion peel consists of a cell wall, cell membrane, cytoplasm, nucleus and a large vacuole. The nucleus is present at the periphery of the cytoplasm. The vacuole is prominent and present at the centre of the cell. It is surrounded by cytoplasm. The presence of a cell wall and a large vacuole are indicators that help identify plant cells, such as seen in the onion peel. 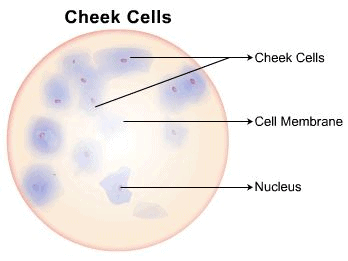 Have you ever wondered what the inside of a cell looks like? If you think about the rooms in our homes, the inside of any animal or plant cell has many similar room-like structures called organelles. Here are some names and descriptions of organelles and other parts commonly found in cells.

The presence of a cell wall is what provides the most significant difference between plant and animal cells, as it is present only in plant cells and covers the cell membrane.The cell wall is rigid and is composed of cellulose fibre, polysaccharides, and proteins. Despite the rigidity of the cell wall, chemical signals and cellular excretions are allowed to pass between cells.

The cell membrane is found in both plants and animals, and it is the outer most layer in the animal cell, that separates the contents of the cell from the outside world. It consists of both lipids and proteins and is selectively permeable, which means it permits only some molecules to pass through it.

Cytoplasm is a jelly-like material that is eighty percent water and is usually clear in colour. It is also called cytosol. Cytoplasm contains all the organelles inside the cell membrane. The cytosol contains dissolved nutrients, helps break down waste products, and moves material around the cell through a process called cytoplasmic streaming.

The nucleus is known as the control centre of the cell.It contains the regulatory machinery responsible for all the activities inside the cell. It is the largest organelle in the cell and it contains the DNA of the cell. DNA contains all the information that helps cells live, perform their functions and reproduce.The nucleus has a double layered covering called nuclear membrane.

A vacuole is a membrane-bound organelle that stores solid and liquid contents.Vacuoles are found in both animal and plant cells, but are much larger in plant cells. Vacuoles are formed by the fusion of multiple membrane vesicles and are effectively just larger forms of these. The organelle has no basic shape or size; its structure varies according to the needs of the cell.

Similarities and Differences between Plant and Animal Cells

Animal and plant cells have a number of key similarities, but also some noted differences. Here are some of the common similarities and differences between plant and animal cells.