Therapeutic applications of ionizing radiation, called radiation therapy or radiotherapy, have existed since the discovery of x-rays and nuclear radioactivity. Today, radiotherapy is used almost exclusively for cancer therapy, where it saves thousands of lives and improves the quality of life and longevity of many it cannot save. Radiotherapy may be used alone or in combination with surgery and chemotherapy (drug treatment) depending on the type of cancer and the response of the patient. A careful examination of all available data has established that radiotherapy’s beneficial effects far outweigh its long-term risks. 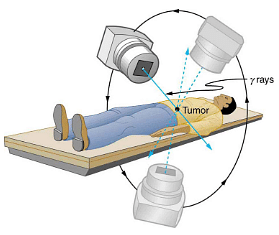 Another form of radiotherapy uses chemically inert radioactive implants. One use is for prostate cancer. Radioactive seeds (about 40 to 100 and the size of a grain of rice) are placed in the prostate region. The isotopes used are usually 135Ι (6-month half life) or 103Pd (3-month half life). Alpha emitters have the dual advantages of a large QF and a small range for better localization.Radio pharmaceuticals are used for cancer therapy when they can be localized well enough to produce a favorable therapeutic ratio. Thyroid cancer is commonly treated utilizing radioactive iodine. Thyroid cells concentrate iodine, and cancerous thyroid cells are more aggressive in doing this. An ingenious use of radio pharmaceuticals in cancer therapy tags antibodies with radioisotopes. Antibodies produced by a patient to combat his cancer are extracted, cultured, loaded with a radioisotope, and then returned to the patient. The antibodies are concentrated almost entirely in the tissue they developed to fight, thus localizing the radiation in abnormal tissue. The therapeutic ratio can be quite high for short-range radiation. There is, however, a significant dose for organs that eliminate radio pharmaceuticals from the body, such as the liver, kidneys, and bladder. As with most radiotherapy, the technique is limited by the tolerable amount of damage to the normal tissue.Typical therapeutic doses of radiation used against certain cancers. The doses are large, but not fatal because they are localized and spread out in time. Protocols for treatment vary with the type of cancer and the condition and response of the patient. Three to five 200-rem treatments per week for a period of several weeks is typical. Time between treatments allows the body to repair normal tissue. This effect occurs because damage is concentrated in the abnormal tissue, and the abnormal tissue is more sensitive to radiation. Damage to normal tissue limits the doses. You will note that the greatest doses are given to any tissue that is not rapidly reproducing, such as in the adult brain. Lung cancer, on the other end of the scale, cannot ordinarily be cured with radiation because of the sensitivity of lung tissue and blood to radiation. But radiotherapy for lung cancer does alleviate symptoms and prolong life and is therefore justified in some cases. 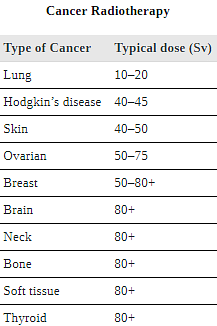 Finally, it is interesting to note that chemotherapy employs drugs that interfere with cell division and is, thus, also effective against cancer. It also has almost the same side effects, such as nausea and hair loss, and risks, such as the inducement of another cancer.Section Summary1. Radiotherapy is the use of ionizing radiation to treat ailments, now limited to cancer therapy.2. The sensitivity of cancer cells to radiation enhances the ratio of cancer cells killed to normal cells killed, which is called the therapeutic ratio.3. Doses for various organs are limited by the tolerance of normal tissue for radiation. Treatment is localized in one region of the body and spread out in time.