Bolts, screws and studs are the most common types of threaded fasteners. They are used in both permanent or removable joints.

Bolts: They are basically threaded fasteners normally used with nuts.

Screws: They engage either with a preformed or a self made internal threads.

Studs: They are externally threaded headless fasteners. One end usually meets a tapped component and the other with a standard nut. There are different forms of bolt and screw heads for a different usage. These include bolt heads of square, hexagonal or eye shape and screw heads of hexagonal, Fillister, button head, counter sunk or Phillips type. These are shown in figures-4.3.1.1 and 4.3.1.2. These are one piece fasteners which cut or form a mating thread when driven into a preformed hole. These allow rapid installation since nuts are not used. There are two types of tapping screws. They are known as thread forming which displaces or forms the adjacent materials and thread cutting which have cutting edges and chip cavities which create a mating thread.

These are semi permanent fasteners which hold collars, pulleys, gears etc on a shaft. Different heads and point styles are available. Some of them are shown in figure-4.3.1.3. 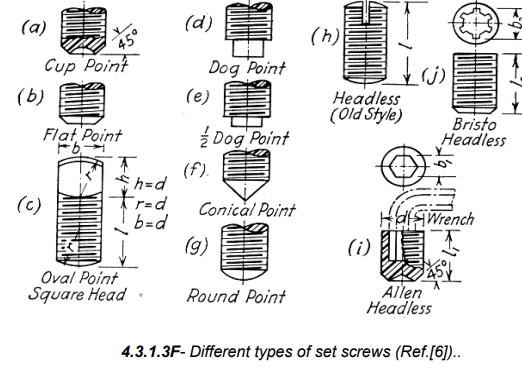 Basically when a helical groove is cut or generated over a cylindrical or conical section, threads are formed. When a point moves parallel to the axis of a rotating cylinder or cone held between centers, a helix is generated. Screw threads formed in this way have two functions to perform in general:

(a) To transmit power - Square. ACME, Buttress, Knuckle types of thread forms are useful for this purpose.

(b) To secure one member to another- V-threads are most useful for this purpose.

Some standard forms are shown in figure-4.3.2.1 V-threads are generally used for securing because they do not shake loose due to the wedging action provided by the thread. Square threads give higher efficiency due to a low friction. This is demonstrated in figure- 4.3.2.2. 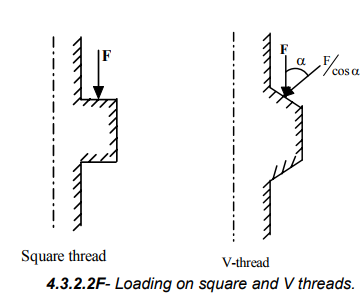