This article explains the 120° mode inverter with the help of relevant circuit diagrams, output waveforms. Formulas for phase and line voltage & merits and demerits of 120° Mode inverter over 180° mode inverter has also been explained.For 120° mode inverter, each thyristor conducts for 120° of a cycle. Like 180° mode, 120° mode inverter also requires six steps, each of 60° duration, for completing one cycle of the output AC voltage. Here it should be noted that step is nothing but the change in firing of one thyristor to the next thyristor in a proper sequence.

The power circuit diagram of a 120° Mode Inverter is shown in the figure below.

The firing sequence for 120° Mode Inverter Operation is tabulated below.

Calculation of Phase and Line Voltages

In step-II, only two thyristors T1 & T6 are conducting. These conducting thyristors are shown as a closed switch and remaining non-conducting thyristors are shown as an open switch in the equivalent circuit diagram.With reference to the equivalent circuit of Step-I, it may be noted that load terminal “a” is connected to the positive bus while terminal “b” is connected to negative bus. This means the voltage across terminals “ab” will be equal to the source voltage Vs. It is also clear that, load terminal “c” is open in this step. Let us now calculate the phase to neutral voltage and phase to phase voltages in step-I.Phase to neutral voltage Vao= Vs/2

Phase to neutral voltage Vbo= -Vs/2

The output voltage waveform of three phase inverter for its 120° mode Inverter is shown below: 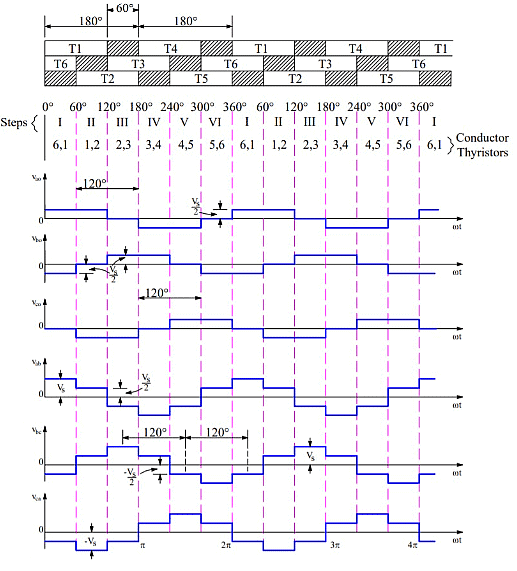 Following points should be noted from the output voltage waveform

Merits and Demerits of 120° Mode Inverter

Formula of Phase and Line Voltage