The document Time Value of Money (Part - 1) CA CPT Notes | EduRev is a part of the CA CPT Course Business Mathematics and Logical Reasoning & Statistics.
All you need of CA CPT at this link: CA CPT

After studying this chapter students will be able to understand:-

Let us take another view. People earn money for satisfying their various needs as discussed above. After satisfying those needs some people may have some savings. People may invest their savings in debentures or lend to other person or simply deposit it into bank. In this way they can earn interest on their investment.Most of you are very much aware of the term interest. Interest can be defined as the price paid by a borrower for the use of a lender’s money.We will know more about interest and other related terms later.

Now question arises why lenders charge interest for the use of their money. There are a variety of reasons. We will now discuss those reasons.

1. Time value of money: Time value of money means that the value of a unity of money is different in different time periods. The sum of money received in future is less valuable than it is today. In other words the present worth of rupees received after some time will be less than a rupee received today. Since a rupee received today has more value rational investors would prefer current receipts to future receipts. If they postpone their receipts they will certainly charge some money i.e. interest.

2. Opportunity Cost: The lender has a choice between using his money in different investments. If he chooses one he forgoes the return from all others. In other words lending incurs an opportunity cost due to the possible alternative uses of the lent money.

3 . Inflation: Most economies generally exhibit inflation. Inflation is a fall in the purchasing power of money. Due to inflation a given amount of money buys fewer goods in the future than it will now. The borrower needs to compensate the lender for this.

4. Liquidity Preference: People prefer to have their resources available in a form that can immediately be converted into cash rather than a form that takes time or money to realize.

5. Risk Factor: There is always a risk that the borrower will go bankrupt or otherwise default on the loan. Risk is a determinable factor in fixing rate of interest.A lender generally charges more interest rate (risk premium) for taking more risk.

Now we can define interest and some other related terms.

4.3.1 Interest: Interest is the price paid by a borrower for the use of a lender’s money. If you borrow (or lend) some money from (or to) a person for a particular period you would pay (or receive) more money than your initial borrowing (or lending). This excess money paid (or received) is called interest. Suppose you borrow (or lend) Rs.50000 for a year and you pay (or receive) Rs.55000 after one year the difference between initial borrowing (or lending) Rs.50000 and end payment (or receipts) Rs.55000 i.e. Rs.5000 is the amount of interest you paid (or earned).

4.3.2 Principal: Principal is initial value of lending (or borrowing). If you invest your money the value of initial investment is also called principal. Suppose you borrow ( or lend) Rs.50000 from a person for one year. Rs.50000 in this example is the ‘Principal.’ Take another example suppose you deposit Rs.20000 in your bank account for one year. In this example Rs.20000 is the principal.

4.3.3 Rate of Interest: The rate at which the interest is charged for a defined length of time for use of principal generally on a yearly basis is known to be the rate of interest. Rate of interest is usually expressed as percentages. Suppose you invest Rs.20000 in your bank account for one year with the interest rate of 5% per annum. It means you would earn Rs.5 as interest every Rs.100 of principal amount in a year.Per annum means for a year.

4.3.4 Accumulated amount (or Balance): Accumulated amount is the final value of an investment. It is the sum total of principal and interest earned. Suppose you deposit Rs.50000 in your bank for one year with a interest rate of 5% p.a. you would earn interest of Rs.2500 after one year. (method of computing interest will be illustrated later). After one year you will get Rs.52500 (principal+ interest), Rs.52 500 is amount here.Amount is also known as the balance.

4.4.1 Simple Interest: Now we would know what is simple interest and the methodology of computing simple interest and accumulated amount for an investment (principal) with a simple rate over a period of time. As you already know the money that you borrow is known as principal and the money that you pay for using somebody else’s money is known as interest. The interest paid for keeping Rs.100 for one year is known as the rate percent per annum. Thus if money is borrowed at the rate of 8% per annum the interest paid for keeping Rs.100 for one year is Rs.8. The sum of principal and interest is known as the amount.Clearly the interest you pay is proportionate to the money that you borrow and also to the period of time for which you keep the money; the more the money and the time the more the interest. Interest is also proportionate to the rate of interest agreed upon by the lending and the borrowing parties. Thus interest varies directly as principal time and rate.Simple interest is the interest computed on the principal for the entire period of borrowing. It is calculated on the outstanding principal balance and not on interest previously earned. It means no interest is paid on interest earned during the term of loan.Simple interest can be computed by applying following formulas:I = PitA = P + I= P + Pit= P(1 + it)I = A – PHereA = Accumulated amount (final value of an investment)P = Principal (initial value of an investment)i = annual interest rate in decimal.I = Amount of Interestt = time in yearsLet us consider the following examples in order to see how exactly are these quantities related.

Solution: Required interest amount is given byI = P × i × t

Example 2: Sania deposited Rs.50000 in a bank for two years with the interest rate of 5.5% p.a. How much interest would she earn?

Solution: Required interest amount is given by I = P × i × t

Example 3: In example 2 what will be the final value of investment?

Solution: Final value of investment is given by A = P(1 + it) Example 4: Sachin deposited Rs.100000 in his bank for 2 years at simple interest rate of 6%.How much interest would he earn? How much would be the final value of deposit?

Solution: (a) Required interest amount is given byI = P × it 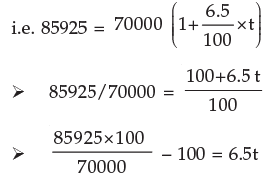 Example 7: Kapil deposited some amount in a bank for 7 ½ years at the rate of 6% p.a. simple interest. Kapil received Rs.101500 at the end of the term. Compute initial deposit of Kapil.

Example 8: A sum of Rs.46875 was lent out at simple interest and at the end of 1 year 8 months the total amount was Rs.50000. Find the rate of interest percent per annum. 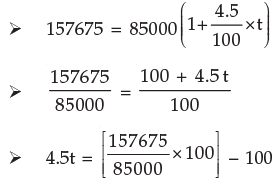 We have learnt about the simple interest. We know that if the principal remains the same for the entire period or time then interest is called the simple interest.However in practice the method according to which banks, insurance corporations and other money lending and deposit taking companies calculate interest is different. To understand this method we consider an example :

Suppose you deposit Rs.50000 in ICICI bank for 2 years at 7% p.a. compounded annually.Interest will be calculated in the following way:

Typical conversion periods are given below:

at the end of third payment period

Computation of A shall be quite simple with a calculator. However compound interest table as well as tables for at various rates per annum with (a) annual compounding ; (b) monthly compounding and (c) daily compounding are available.

Example 12: Rs. 2000 is invested at annual rate of interest of 10%. What is the amount after two years if compounding is done (a) Annually (b) Semi-annually (c) Quarterly (d) monthly.

connects C.I., P, i and n. Whenever three out of these four variables are given the fourth can be found out by simple calculations.

Examples 15: On what sum will the compound interest at 5% per annum for two years compounded annually be Rs.1640?

Solution: If the principal be P then An = 2P. 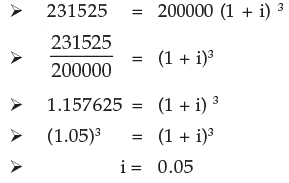 Example 19: A certain sum invested at 4% per annum compounded semi-annually amounts to Rs.78030 at the end of one year. Find the sum. Therefore time period of investment is three half years i.e.

Example 21: A person opened an account on April, 2001 with a deposit of Rs.800. The account paid 6% interest compounded quarterly. On October 1 2001 he closed the account and added enough additional money to invest in a 6 month time-deposit for Rs. 1000, earning 6% compounded monthly.

(b) In this case the time-deposit earned interest compounded monthly for six months.