The document Tools of Recombinant DNA Technology: Cloning Vectors NEET Notes | EduRev is a part of the NEET Course Biology Class 12.
All you need of NEET at this link: NEET

Vehicle DNA or Vector DNA: The DNA used as a carrier for transferring a fragment of foreign DNA into a suitable host is called vehicle or vector DNA.You know that plasmids and bacteriophages have the ability to replicate within bacterial cells independent of the control of chromosomal DNA.The following are the features that are required to facilitate cloning into a vector.

(i) Origin of replication (ori) : This is a sequence from where replication starts and any piece of DNA when linked to this sequence can be made to replicate within the host cells. This sequence is also responsible for controlling the copy number of the linked DNA. So, if one wants to recover many copies of the target DNA it should be cloned in a vector whose origin support high copy number.

(ii) Selectable marker : In addition to 'ori', the vector requires a selectable marker. Normally, the genes encoding resistance to antibiotics such as ampicilin, chloramphenicol,  tetracycline or kanamycin, etc., are considered useful selectable markers for E. coli. 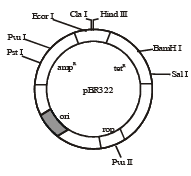 Selection of recombinants due to inactivation of antibiotics is a cumbersome (troublesome) procedure because it requires simultaneous plating on two plated having different antibiotics. Therefore, alternative selectable markers have been developed which differentiate recombinants from non-recombinants on the basis of their ability to produce colour in the presence of a chromogenic substrate. In this, a recombinant DNA is inserted within the coding sequence of an enzyme, which is referred to as insertional inactivation.The presence of a chromogenic substrate X–gal (5–bromo–4 chloro– β-D galacto pyranoside) gives blue coloured colonies if the plasmid in the bacteria does not have an insert. Presence of insert results into insertional inactivation of the β-galactosidase (reporter enzyme) and the colonies do not produce any colour, these are identified as recombinant colonies.

(iv) Vectors for cloning genes in plants and animals : Agrobacterium tumifaciens, a pathogen of several dicot plants deliver a piece of DNA known as 'T-DNA' to transform normal plant cells into a tumour .Similarly, retroviruses in animals have the ability to transform normal cells intocancerous cells. A better understanding of the art of delivering genes by pathogens in their vivo hosts has generated knowledge to transform these tools of pathogens into useful vectors for delivering genes of interest to humans. The tumour inducing (Ti) plasmid of Agrobacterium tumifaciens has now been modified into  a cloning vector which is no more pathogenic to the plants but is still able to use the mechanisms to  deliver genes (disarmed) and are now used to deliver desirable genes into animal cells. So, once a gene or a DNA fragment has been ligated into a suitable vector it is transferred into a bacterial, plant or animal host (where it multiplies).

(i) Plasmids. They are extra chromosomal DNA segments found in bacteria which can replicate independently. Plasmids can be taken out of bacteria and made to combine with desired DNA segments by means of restriction enzymes and DNA ligase. A plasmid carrying DNA of another organism integrated with it, is known as recombinant plasmid or hybrid plasmid or Chimeric plasmid.

(ii) Viruses. The DNA of certain viruses is also suitable for use as a vehicle DNA. Bacteriophage (bacterial virus) has been used to transfer gene for b galactosidase from Escherichia coli to human cells. Lambda phage (l phage) has been used for transferring lac genes ofE. coliinto haploid callus of tomato. 3. Passenger DNA. It is the DNA which is transferred from one organism into another by combining it with the vehicle DNA. The passenger DNA can be complementary, synthetic or random.

(i) Complementary DNA (cDNA)- It is synthesized on mRNA template with the help of reverse transcriptase and necessary nucleotides. The DNA strand is then separated from the hybrid RNA-DNA complex by using alkali. Complementary DNA strand is then synthesized over the template of cDNA with the help of DNA polymerase. cDNA formed through reverse transcription is shorter than the actual or in vivo gene because of the absence of introns or non-coding regions.

(ii) Synthetic DNA (sDNA)- It is synthesized with the help of DNA polymerase on DNA template.Kornberg (1961) synthesized first synthetic DNA from a mixture of deoxyribonucleotide triphosphates, DNA polymerase enzyme, metal ions and a segment of viral DNA.Khorana (1968) synthesized first artificial gene (DNA) without a template. They synthesized the gene coding for yeast alaninet-RNA,which contained only 77 base pairs. However, it did not function in the living system. In 1979, Khorana was able to synthesize a functional tyrosine t-RNA gene of E. coli with 207 nucleotide pairs. Since then a number of genes have been synthesized artificially.

(iii) Random DNA - It refers to small fragments formed by breaking a chromosome with the help of restriction endonucleases. Fig.: Mechanism of transferring insulin gene from human DNA to E.coli with a plasmid