The document Tools of Recombinant DNA Technology: Restriction Enzymes Notes | EduRev is a part of the NEET Course Biology Class 12.
All you need of NEET at this link: NEET

“Restriction enzymes are the enzymes produced by certain bacteria that have the property of cleaving DNA molecule at or near specific base sequences.”

What are Restriction Enzymes?

Type IThese restriction enzymes cut the DNA far from the recognition sequences. However, they do not produce discrete restriction fragments, hence, are of not much practical value.These are complex, multi-subunit restriction and modification enzymes. They were initially thought to be rare, but through genomic analysis, they are found to be common and are of considerable biochemical interest.

Type IIThese enzymes cut at specific positions closer to or within the restriction sites. Discrete restriction fragments and gel banding patterns are observed. They are exclusively used for DNA analysis and gene cloning in the laboratories. These are a family of unrelated proteins. They are named after the bacterial species from which they are isolated. For eg., EcoRI is isolated from bacterial species E.coli. The restriction enzymes generate two different types of cuts. Blunt ends are produced when they cut the DNA at the centre of the recognition sequence, and sticky ends produce an overhang.

Type IIIThese are multi-functional proteins with two subunits- Res and Mod. It is a modification methyltransferase. The DNA sequence specific for the system is recognized by the Mod subunit.

They are used in RFLP techniques to cut the DNA into smaller fragments to study the fragment length differences among the individuals.

In Gene CloningDuring cloning, a gene is inserted into a plasmid. Restriction enzymes cut the plasmid producing single-stranded overhangs. The two DNA molecules are ligated with the help of DNA ligase to form a single DNA molecule. 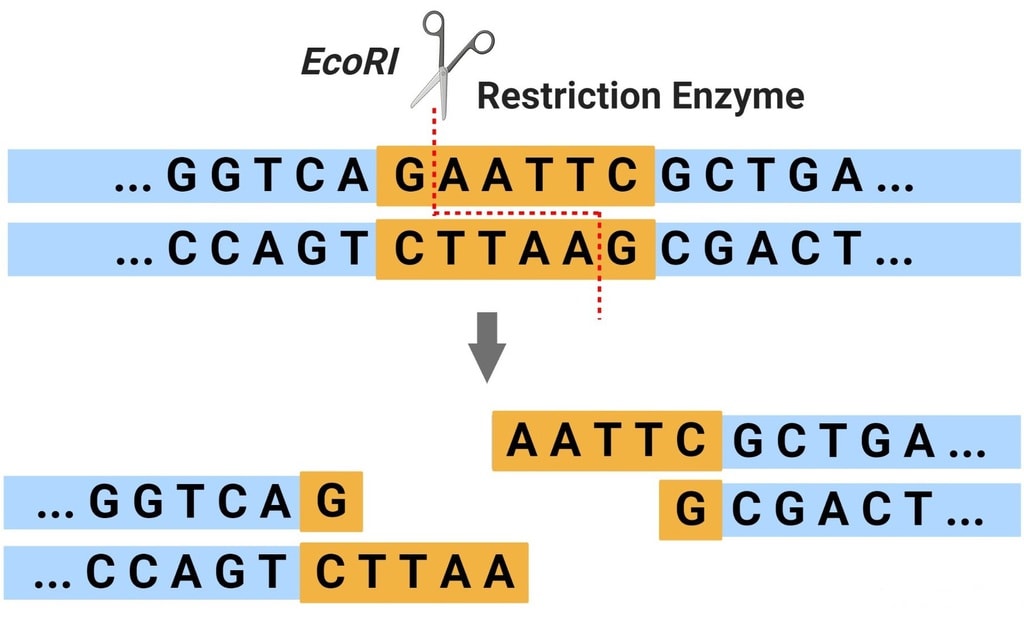 Recognition sequences of some restriction endonucleases:

(iii) Synthesizing enzymes: These enzymes are used to synthesize new strands of DNA, complementary to existing DNA or RNA template. They are of two types; reverse transcriptases and DNA polymerases.

(a) Reverse transcriptases help in the synthesis of complementary DNA strands on RNA templates;

(b) DNA polymerases help in the synthesis of complementary DNA strands on DNA templates.

(iv) Alkaline phosphatases: These enzymes cut off phosphate group from the 5' end of linearised circular DNA and prevent its re-circularisation.