Top down parsing and Bottom up Parsing

It is the process of analyzing a continuous stream of input in order to determine its grammatical structure with respect to a given formal grammar.

It is the process of analyzing a continuous stream of input in order to determine its grammatical structure with respect to a given formal grammar.

Graphical representation of a derivation or deduction is called a parse tree. Each interior node of the parse tree is a non-terminal; the children of the node can be terminals or non-terminals.

It can be viewed as an attempt to find a left-most derivation for an input string or an attempt to construct a parse tree for the input starting from the root to the leaves.

Typically, top-down parsers are implemented as a set of recursive functions that descent through a parse tree for a string. This approach is known as recursive descent parsing, also known as LL(k) parsing where the first L stands for left-to-right, the second L stands for leftmost-derivation, and k indicates k-symbol lookahead.

Therefore, a parser using the single-symbol look-ahead method and top-down parsing without backtracking is called LL(1) parser. In the following sections, we will also use an extended BNF notation in which some regulation expression operators are to be incorporated.

This parsing method may involve backtracking.

and the input string w=cad.

The parse tree can be constructed using the following top-down approach :

Initially create a tree with single node labeled S. An input pointer points to ‘c’, the first symbol of w. Expand the tree with the production of S.

The leftmost leaf ‘c’ matches the first symbol of w, so advance the input pointer to the second symbol of w ‘a’ and consider the next leaf ‘A’. Expand A using the first alternative. 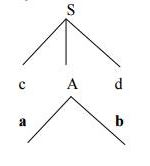 The second symbol ‘a’ of w also matches with second leaf of tree. So advance the input pointer to third symbol of w ‘d’.But the third leaf of tree is b which does not match with the input symbol d.Hence discard the chosen production and reset the pointer to second backtracking.

Now try the second alternative for A.

Now we can halt and announce the successful completion of parsing.

It is possible to build a nonrecursive predictive parser by maintaining a stack explicitly, rather than implicitly via recursive calls. The key problem during predictive parsing is that of determining the production to be applied for a nonterminal . The nonrecursive parser in figure looks up the production to be applied in parsing table. In what follows, we shall see how the table can be constructed directly from certain grammars.

A table-driven predictive parser has an input buffer, a stack, a parsing table, and an output stream. The input buffer contains the string to be parsed, followed by $, a symbol used as a right endmarker to indicate the end of the input string. The stack contains a sequence of grammar symbols with $ on the bottom, indicating the bottom of the stack. Initially, the stack contains the start symbol of the grammar on top of $. The parsing table is a two dimensional array M[A,a] where A is a nonterminal, and a is a terminal or the symbol $. The parser is controlled by a program that behaves as follows. The program considers X, the symbol on the top of the stack, and a, the current input symbol. These two symbols determine the action of the parser. There are three possibilities.

1 If X= a=$, the parser halts and announces successful completion of parsing.

2   If X=a!=$, the parser pops X off the stack and advances the input pointer to the next input symbol.

3   If X is a nonterminal, the program consults entry M[X,a] of the parsing table M. This entry will be either an X-production of the grammar or an error entry. If, for example, M[X,a]={X- >UVW}, the parser replaces X on top of the stack by WVU( with U on top). As output, we shall assume that the parser just prints the production used; any other code could be executed here. If M[X,a]=error, the parser calls an error recovery routine

Input. A string w and a parsing table M for grammar G.

Output. If w is in L(G), a leftmost derivation of w; otherwise, an error indication.

Method. Initially, the parser is in a configuration in which it has $S on the stack with S, the start symbol of G on top, and w$ in the input buffer. The program that utilizes the predictive parsing table M to produce a parse for the input is shown in Fig.set ip to point to the first symbol of w$. repeat let X be the top stack symbol and a the symbol pointed to by ip. if X is a terminal of $ then

pop X from the stack and advance ip else error()

The construction of a predictive parser is aided by two functions associated with a grammar G :

2. If there is a production A → αBβ, then everything in FIRST(β) except ε is placed in follow(B).

4. Make each undefined entry of M be error.

After eliminating left-recursion the grammar is The parsing table entries are single entries. So each location has not more than one entry. This type of grammar is called LL(1) grammar.

After eliminating left factoring, we have

To construct a parsing table, we need FIRST() and FOLLOW() for all the non-terminals.

Since there are more than one production, the grammar is not LL(1) grammar.

4.  Parse the given input string using stack and parsing table

Constructing a parse tree for an input string beginning at the leaves and going towards the root is called bottom-up parsing. A general type of bottom-up parser is a shift-reduce parser.

Shift-reduce parsing is a type of bottom-up parsing that attempts to construct a parse tree for an input string beginning at the leaves (the bottom) and working up towards the root (the top).

The sentence to be recognized is abbcde.

The reductions trace out the right-most derivation in reverse.

A handle of a string is a substring that matches the right side of a production, and whose reduction to the non-terminal on the left side of the production represents one step along the reverse of a rightmost derivation.

And the input string id1+id2*id3

The rightmost derivation is :

In the above derivation the underlined substrings are called handles.

•   shift - The next input symbol is shifted onto the top of the stack.

•   reduce - The parser replaces the handle within a stack with a non-terminal.

•   error - The parser discovers that a syntax error has occurred and calls an error recovery routine.

There are two conflicts that occur in shift-reduce parsing:

1. Shift-reduce conflict: The parser cannot decide whether to shift or to reduce.

2. Reduce-reduce conflict: The parser cannot decide which of several reductions to make. 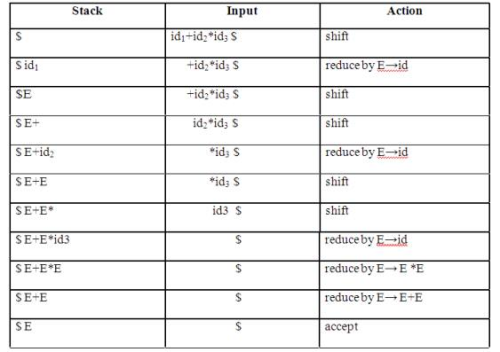 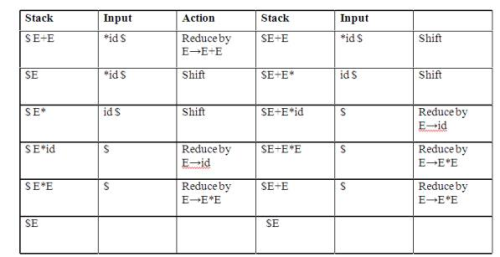 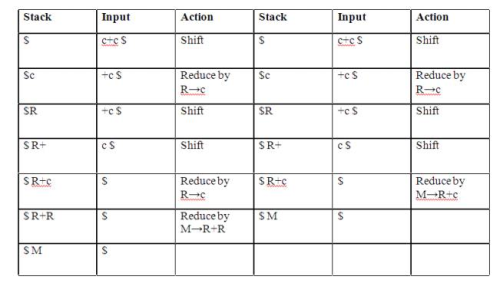 An efficient way of constructing shift-reduce parser is called operator-precedence parsing. Operator precedence parser can be constructed from a grammar called Operator-grammar. These grammars have the property that no production on right side is ɛor has two adjacent non-terminals.

Since the right side EAE has three consecutive non-terminals, the grammar can be written as follows: E→E+E|E-E|E*E|E/E|E↑E |-E|id

The relations give the following meaning:

a<.b - a yields precedence to b

a=b - a has the same precedence as b

a.>b - a takes precedence over b

1. If operator θ1 has higher precedence than operator θ2, then make

2. If operators θ1 and θ2, are of equal precedence, then make

3. Make the following for all operators θ:

Operator-precedence relations for the grammar

1.   ↑ is of highest precedence and right-associative

2.   * and / are of next higher precedence and left-associative, and

3.   + and - are of lowest precedence and left- Note that the blanks in the table denote error entries.

Input : An input string w and a table of precedence relations.

Output : If w is well formed, a skeletal parse tree ,with a placeholder non-terminal E labeling all interior nodes; otherwise, an error indication.

Method : Initially the stack contains $ and the input buffer the string w $. To parse, we execute the following program :

(5)    let a be the topmost terminal symbol on the stack and let b be the symbol pointed to by ip;

(12)    until the top stack terminal is related by <.to the terminal most recently popped

Operator precedence parsing uses a stack and precedence relation table for its implementation of above algorithm. It is a shift-reduce parsing containing all four actions shift, reduce, accept and error.

The initial configuration of an operator precedence parsing is

where w is the input string to be parsed.

1. It is easy to implement.

2. Once an operator precedence relation is made between all pairs of terminals of a grammar, the grammar can be ignored. The grammar is not referred anymore during implementation.

2.   Only a small class of grammar can be parsed using operator-precedence parser.

An efficient bottom-up syntax analysis technique that can be used CFG is called LR(k) parsing. The ‘L’ is for left-to-right scanning of the input, the ‘R’ for constructing a rightmost derivation in reverse, and the ‘k’ for the number of input symbols. When ‘k’ is omitted, it is assumed to be 1.

1. It recognizes virtually all programming language constructs for which CFG can be written.

4. 4. It detects a syntactic error as soon as possible.

It is too much of work to construct a LR parser by hand for a programming language grammar. A specialized tool, called a LR parser generator, is needed. Example: YACC.

Most powerful, most expensive.

Intermediate in size and cost between the other two methods.

The schematic form of an LR parser is as follows: 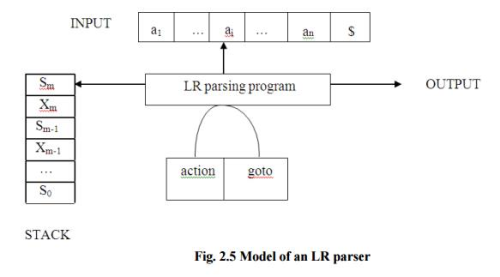 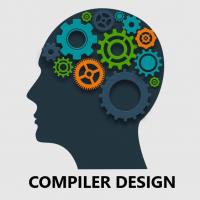