All Mohr circles for UU test plotted in terms of total stresses have the same diameter.

The failure envelope is a horizontal straight line and hence

It can be represented by the equation:

For tests involving drainage in the first stage, when Mohr circles are plotted in terms of total stresses, the diameter increases with the confining pressure. The resulting failure envelope is an inclined line with an intercept on the vertical axis.

It can be stated that for identical soil samples tested under different triaxial conditions of UU, CU and CD tests, the failure envelope is not unique.

If the same triaxial test results of UU, CU and CD tests are plotted in terms of effective stresses taking into consideration the measured pore water pressures, it is observed that all the Mohr circles at failure are tangent to the same failure envelope, indicating that shear strength is a unique function of the effective stress on the failure plane.

is the effective stress acting on the rupture plane at failure,

The relationship between the effective stresses on the failure plane is

It is easy to construct a series of total stress Mohr Circles but the inferred total stress parameters have no relevance to actual soil behaviour. In principle, the effective strength parameters are necessary to check the stability against failure for any soil construction in the field. To do this, the pore water pressure in the ground under the changed loading conditions must be known and in general they are not.

In an undrained triaxial test with pore pressure measurement, this is possible and the effective stresses can then be determined. Alternatively, in drained tests, the loading rate can be made sufficiently slow so as to allow the dissipation of all excess pore water pressure. For low permeability soils, the drainage will require longer times.

In undrained tests, the general expression relating total pore water pressure developed and changes in applied stresses for both the stages is:

Parameter B is a function of the degree of saturation of the soil (= 1 for saturated soils, and = 0 for dry soils). Parameter A is also not constant, and it varies with the over-consolidaton ratio of the soil and also with the magnitude of deviator stress. The value of A at failure is necessary in plotting the effective stress Mohr circles.

Consider the behaviour of saturated soil samples in undrained triaxial tests. In the first stage, increasing the cell pressure without allowing drainage has the effect of increasing the pore water pressure by the same amount. Thus, there is no change in the effective stress. During the second shearing stage, the change in pore water pressure can be either positive or negative.

Sands are usually sheared under drained conditions as they have relatively higher permeability. This behaviour can be investigated in direct shear or triaxial tests. The two most important parameters governing their behaviour are the relative density (ID) and the magnitude of the effective stress (s¢). The relative density is usually defined in percentage as

where emax and emin are the maximum and minimum void ratios that can be determined from standard tests in the laboratory, and e is the current void ratio. This expression can be re-written in terms of dry density as

where gdmax and gdmin are the maximum and minimum dry densities, and gd is the current dry density. Sand is generally referred to as dense if ID > 65% and loose if < 35%.

The influence of relative density on the behaviour of saturated sand can be seen from the plots of CD tests performed at the same effective confining stress. There would be no induced pore water pressures existing in the samples. • All samples approach the same ultimate conditions of shear stress and void ratio, irrespective of the initial density. The denser sample attains higher peak angle of shearing resistance in between.

at all confining pressures. Therefore, the vertical axial stress at failure, 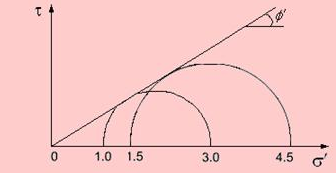 From the plot, one can obtain