Town planning is the most striking feature of Indus valley civilization. Their town planning proves that they lived a highly civilized and developed life. Indus people were among the first to build planned cities with scientific drainage system. The Indus cities were built on a uniform plan. 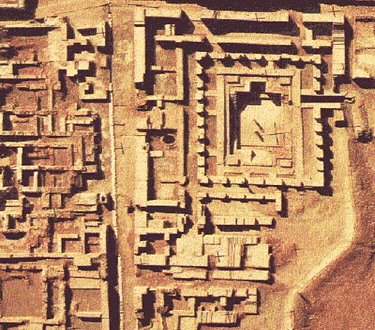 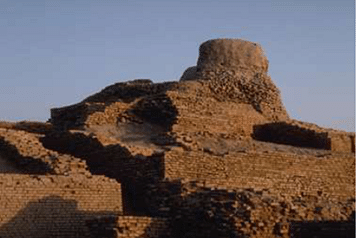 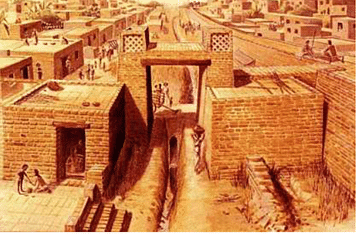 Question for Town Planning & Architecture: Indus Valley Civilization
Try yourself:Consider the following statements regarding the planning of streets of Harappan towns:
I. The towns were well planned and the streets cut each other on the sixty degree angles.
II. The connecting streets were oriented in the east-west direction.
III. The civic sense of people in this civilization was such that during the height of the civilization, no encroachment on the streets was to be seen.
Which of the following statement(s) is/are correct?
Explanation

The IVC cities were planned well in advance. The streets cut each other at ninety degrees or right angles and not sixty degrees.

Town planning is the most striking feature of Indus valley civilization. Their town planning proves that they lived a highly civilized and developed life. Indus people were among the first to build planned cities with scientific drainage system. The Indus cities were built on a uniform plan. 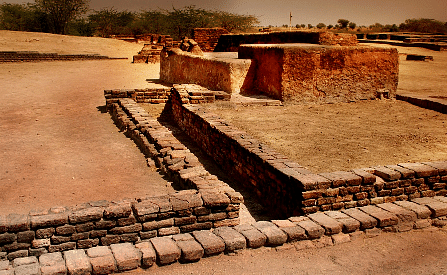 The above features is indicative of the following:

(i) Advancement in Municipal system

The Great Bath is one of the well-known structures among the ruins of Mohenjo-daro in Sindh, Pakistan. It was built in the 3rd millennium BCE soon after the building of the Citadel. 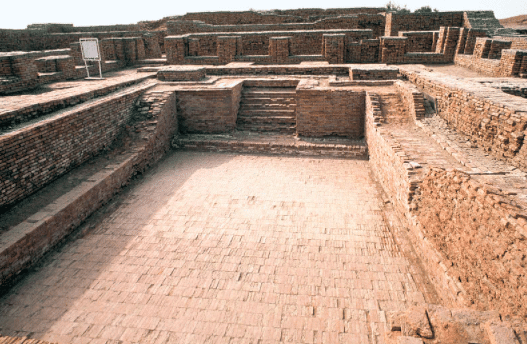 Question for Town Planning & Architecture: Indus Valley Civilization
Try yourself:Which of the following is used in the floor of the Great Bath, besides burnt bricks and mortar?
Explanation

The floor of the bath was constructed of sawn bricks set on edge in gypsum mortar, with a layer of bitumen sandwiched between the inner and outer brick layers.

I. The drainage system of the Indus Valley Civilization indicates that people had NO civic sense of sanitation and care for health and hygiene.
II. Small drains were connected to bathrooms of private houses which then joined the main drains in the side streets.
III. The larger sewers in the main streets were covered drains were covered by stone slabs.

The IVC is particularly known for its well-designed drainage systems. It shows that the inhabitants highly regarded personal and public hygiene. Thus it is wrong to say that IVC people had no civic sense of hygiene and sanitation.

The Great Granary is found in Harappa. It is a brick structure that was built on a massive brick foundation over 45 meters north south and 45 meters east-west. 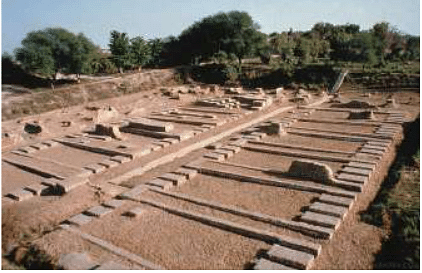 The domestic house planning and architecture is well evident from the lower town of the Mohenjo-Daro. The streets along with an efficient drainage system seems to have been constructed first and the houses built around them were constructed later indicating the existence of advanced town-planning.

Question for Town Planning & Architecture: Indus Valley Civilization
Try yourself:The remarkable thing about the arrangement of the houses in the cities is that they followed the following system:
Explanation

By 2600 BC, Mohenjodaro and Harappa are the major cities of the Indus Valley Civilization, which were built with blocks divided by a grid of straight streets and running north-south and east-west.

View Solution
Question for Town Planning & Architecture: Indus Valley Civilization
Try yourself:Consider the following statements regarding IVC;
I. All houses in IVC cities had 2 rooms only.
II. Lime and Jaggery was used to join bricks for the construction of IVC houses.
III. There was no uniform standard for the bricks used.
Choose the correct answer:
Explanation

There is evidence for multi-roomed houses belonging to rich individuals. Gypsum mortar was used to bind the bricks. All bricks used for construction were of a certain standard ratio (4:2:1)