Question 1. An observer counts 240 veh/h at a specific highway location. Assume that the vehicle arrival at the location is Poisson distributed, the probability of having one vehicle arriving over a 30-second time interval is _______ .     [2014 : 2 Marks, Set-II]Solution: 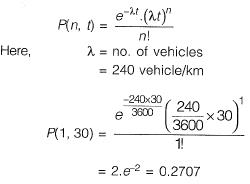 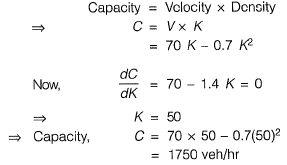 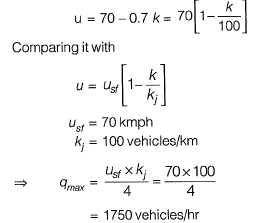 V15 = Maximum 15 minute volume within the peak hr. (veh.)Maximum value is 1.0 and minimum value is 0.25 Normal range is 0.7 - 0.98Method-IConsider a peak hour with total traffic V.Let the traffic be divided as such, 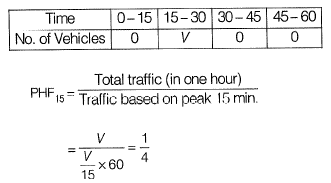 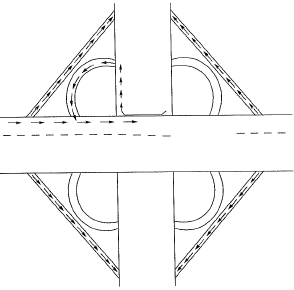 Question 7. It was observed that 150 vehicle crossed a particular location of highway in 30 minutes. Assume that vehicle arrival follow a negative exponential distribution. The number of time headways greater than 5 sec. in above observation is    [2013 : 1 Mark]Solution:

Where, P(x) is the probability of x events (vehicle arrivals) in some time interval (t).X is the mean arrival rate in that interval.

Question 8. A two-lane urban road with one-way traffic has a maximum capacity of 1800 vehicles/hour. Under the jam condition, the average length occupied by the vehicles is 5.0 m. The speed versus density relationship is linear. For a traffic volume of 1000 vehicles/hour, the density (in vehicles/km) is    [2012 : 2 Marks](a) 52(b) 58(c) 67(d) 75Answer: (c)Solution:Method-IICapacity per lane 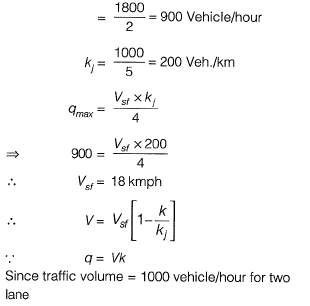 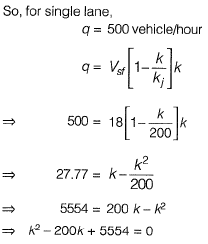 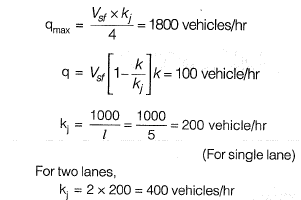 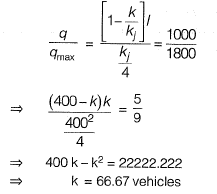 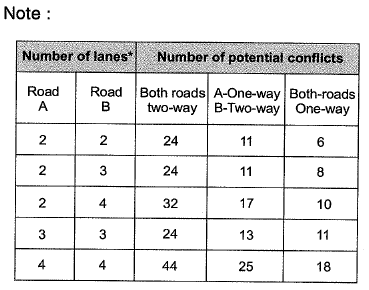 Question 10.  The cumulative arrival and departure curve of one cycle of an approach lane of a signalized intersection is shown in the adjoining figure. The cycle time is 50 s and the effective red time is 30s and the effective green time is 20 s. What is the average delay?   [2011 : 2 Marks] 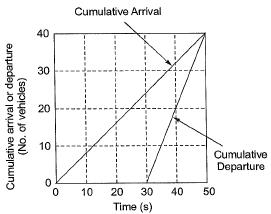 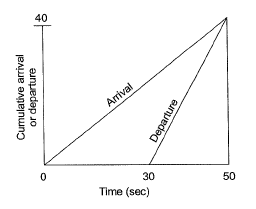 Question 11. If the jam density is given as k- and the free flow speed is given as uf, the maximum flow for a linear traffic speed-density model is given by which of the following options?    [2011 : 2 Marks](a)

Answer: (a)Question 12. The probability that k number of vehicles arrive (i.e. cross a predefined line) in time t is given as (λt) e-λt/k! where λ is the average vehicle arrival rate. What is the probability that the time headway is greater than or equal to time t1?   [2011 : 1 Mark](a)

If time headway is greater than or equal to time f, then number of vehicles arriving is zero,