Transformation of curves, surfaces and volume Before rigorously deriving the general expressions for transformation of curves, surfaces and volumes, let us obtain these expressions after various simplifying assumptions.Let us assume the following:1. The same Cartesian coordinate basis and origin is used to describe the body in both its reference and current configuration.2. The body is subjected to displacement u and the Lagrangian description of the displacement field is known and is sufficiently smooth for the required derivatives to exist. That is  u = ux(X, Y, Z)ex + uy(X, Y, Z)ey + +uz(X, Y, Z)ez,                           (3.43)

Figure 3.3: Schematic of the deformation of a line oriented along ex of length ∆X.where ux(X, Y, Z), uy(X, Y, Z) and uz(X, Y, Z) are some known functions of the X, Y and Z the coordinates of the material particles in the reference configuration.3. It is assumed that the components of the displacement can be approximated as 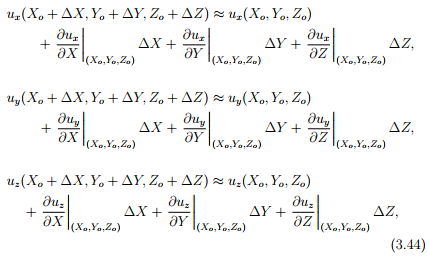 Hence, the stretch ratio defined as the ratio of the current length to the undeformed length for a line element oriented along the ex direction is,

Figure 3.4: Schematic of the deformation of a face of the cube.which can be approximately computed as,

when the components of the displacement gradient are small. Following a similar procedure, one can determine how the length of line elements oriented along any direction changes. We shall derive a general expression for the same later in section 3.6.1. Next we are interested in finding how the area of a face of a small cuboid changes due to deformation. Let us assume that the face of the cuboid whose normal coincides with the ez basis is of interest and the sides of this face of the cuboid are of length ∆X along the ex direction and ∆Y along the ey direction. Thus, as shown in figure 3.4, Xo (= Xoex + Yoey + Zoez), X1 (= (Xo+∆X)ex+Yoey+Zoez) and X2 (= Xoex+(Yo+∆Y )ey+Zoez) denote the position vector of the three corners of the face of the cuboid whose normal is ez in the reference configuration and xo, x1 and x2 denote the position of the same three corners of the face of the cuboid in the current configuration. For the same three assumptions listed above, the deformed area of this face of the cuboid is given by

and the orientation of the normal to this deformed face is computed as,

When the magnitude of the components of the displacement gradient are small, then the deformed volume of the cuboid could be computed from equation (3.51) as,

by neglecting the quadratic and cubic terms in equation (3.51).

Transformation of curves We know the position vector of any particle belonging to the body at various instances of time, t. But now we are interested in finding how a set of contiguous points forming a curve changes its shape. That is, we are interested in finding how a circle inscribed in the reference configuration changes its shape, say into an ellipse, in the current configuration. As we have required the deformation field to be one to one, closed curves like circle, ellipse, will remain as closed curves and open curves like straight line, parabola remains open. The position vectors of the particles that occupy a curve can be described using a single variable, say ξ. For example, a circle of radius R in the plane whose normal coincides with ez, as shown in figure 3.5a would be described as (R cos(ξ), R sin(ξ), Zo), where R and Zo are constants and 0 ≤ ξ ≤ 2π.Consider a material curve (or a curve in the reference configuration), X = Γ(ξ) ⊂ Br, where ξ denotes a parametrization. The material curve by virtue of it being defined in the reference configuration is not a function of time. During a certain motion, the material curve deforms into another curve called the spatial curve, x = γ(ξ, t) ⊂ Bt , (see figure 3.5b). The spatial curve at a fixed time t is then defined by the parametric equation 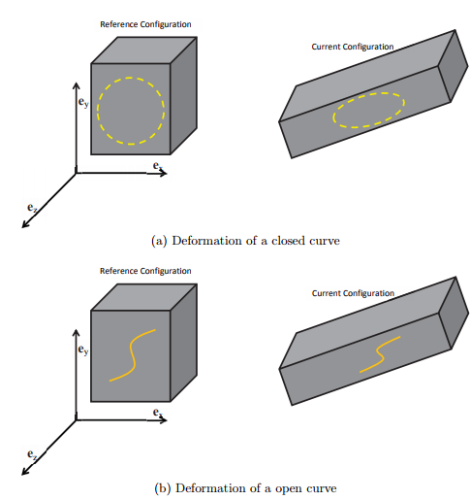 Figure 3.5: Curves in the reference configuration deforming into another curve in the current configurationBy using (3.53) and the chain rule we find that

Using (3.65) and similar arguments as that used to obtain the stretch ratio, it can be shown that the final angle, αf between the straight line segments initially oriented along A1 and A2 is given by

Just, as in the case of stretch ratio, we can also study the initial angle, αi between straight line segments that are finally oriented along a1 and a2. For this case, following the same steps outlined above we compute

We like to record that as in the case of stretch ratio, αi and αf depends on the orientation of the line segments. Next, let us see what happens when the deformation is inhomogeneous. For inhomogeneous deformation, the Cartesian components of the deformation gradient would vary spatially and the straight line segment in the reference configuration would have become a curve in the current configuration. Hence, distinction between the tangent and the secant has to be made. Now, the deformed length of the curve, ∆l corresponding to that of a straight line of length ∆L oriented along A is obtained from equation (3.56) as, 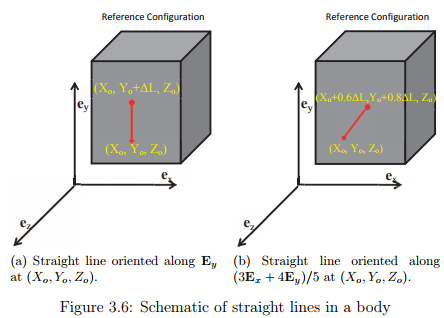 where A is a constant vector,

Transformation of areas Having seen how points, curves, tangent vectors in the reference configuration gets mapped to points, curves and tangent vectors in the current configuration, we are now in a position to look at how surfaces get mapped. Of interest, is how a unit vector, N normal to an infinitesimal material surface element ∆A map on to a unit vector n normal to the associated infinitesimal spatial surface element ∆a.

on using the equation (3.59) and the fact that n is a unit vector. Notice that, once again the deformed area is determined by the right Cauchy-Green deformation tensor.Transformation of volumes Next, we seek to obtain the relation between elemental volumes in the reference and current configuration. An element of volume ∆V at a interior point P in reference configuration is given by the scalar triple product [∆X, ∆Y, ∆Z] where ∆X, ∆Y and ∆Z are vectors oriented along the sides of an infinitesimal parallelepiped. Since, the point under consideration is interior, we can always find three material curves such that they pass through the point P and ∆X, ∆Y and ∆Z are its tangent vectors at P. Now say due to some motion of the body, the material particle that occupied the point P, now occupies the point p, then the curves under investigation would pass through p and the tangent vectors of these curves at this point p would now be ∆x, ∆y, ∆z. Hence,∆v = [∆x, ∆y, ∆z] = [F∆X, F∆Y, F∆Z] = det(F)[∆X, ∆Y, ∆Z] = det(F)∆V,              (3.75)where we have used the definition of the determinant (2.77). Since, the coordinate basis vectors for the reference and current configuration have the same handedness, det(F) ≥ 0. Further since, we require the mapping of the body from one configuration to the other be one to one, material particles in a parallelepiped cannot be mapped on to a surface. Hence, det(F) ≠ 0. Therefore det(F) > 0. Thus, for a vector field to be a deformation field, det(F) > 0.