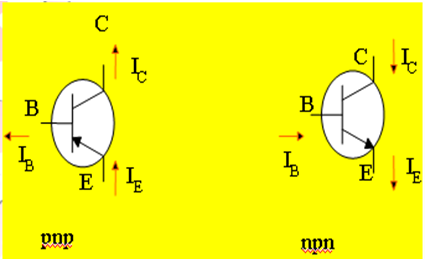 The above fig 2 shows the various current components, which flow across the forward biased emitter junction and reverse- biased collector junction. The emitter current IE consists of hole current IPE (holes crossing from emitter into base) and electron current InE (electrons crossing from base into emitter).The ratio of hole to electron currents, IpE / InE   , crossing the emitter junction is proportional to the  ratio of the conductivity of the p material to that of the n material. In a transistor, the doping of the emitter is made much larger than the doping of the base. This feature ensures (in p-n-p transistor) that the emitter current consists of holes in a larger proportion. Such a situation is desired since the current which results from electrons crossing the emitter junction from base to emitter does not contribute carriers, which can reach the collector.

Not all the holes crossing the emitter junction JE reach the the collector junction JC because some of them combine with the electrons in n-type base. If IpC   is hole current at junction JC there must be a bulk recombination current ( IpE- IpC ) leaving the base.

Actually, electrons enter the base region through the base lead to supply those charges, which have been lost by recombination with the holes injected into the base across JE. If the emitter was open circuited so that IE=0 then IpC would be zero. Under these circumstances, the base current IB and collector current IC would equal the reverse saturation current ICO. If IE≠0 then

One p-n junction of a transistor is reverse-biased, whereas the other is forward-biased.

Forward-biased junction of a pnp transistor 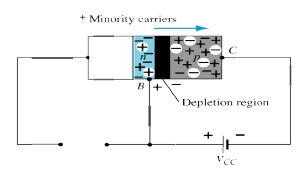 Reverse-biased junction of a pnp transistor Both biasing potentials have been applied to a pnp transistor and resulting majority and minority carrier flows indicated.

Majority carriers (+) will diffuse across the forward-biased p-n junction into the n-type material.

A very small number of carriers (+) will through n-type material to the base terminal. Resulting IB , typically in order of microamperes.

The large number of majority charge carriers will diffuse across the reverse-biased junction into the p-type material connected to the collector terminal.

Applying KCL to the transistor :

IC comprises of two components – the majority and minority carriers

Various parameters which relate the current components are given below:

The ratio of the negative of collector current increment to the  emitter current change from zero (cut-off)to IE. The large signal current gain of a common base transistor.

Since IC and IE have opposite signs, then α, as defined, is always positive. Typically numerical values of α lies in the range of 0.90 to 0.995.

The transistor alpha is the product of the transport factor and the emitter efficiency. This statement assumes that the collector multiplication ratio α is unity. α is the ratio of total current crossing JC to hole arriving at the junction.