4.3 TRANSITION DIAGRAM:Transition Diagram has a collection of nodes or circles, called states. Each state represents a condition that could occur during the process of scanning the input looking for a lexeme that matches one of several patterns .Edges are CREC, Dept. of CSE Page 19 directed from one state of the transition diagram to another. each edge is labeled by a symbol or set of symbols.If we are in one state s, and the next input symbol is a, we look for an edge out of state s labeled by a. if we find such an edge ,we advance the forward pointer and enter the state of the transition diagram to which that edge leads.Some important conventions about transition diagrams are1. Certain states are said to be accepting or final .These states indicates that a lexeme has been found, although the actual lexeme may not consist of all positions b/w the lexeme Begin and forward pointers we always indicate an accepting state by a double circle.2. In addition, if it is necessary to return the forward pointer one position, then we shall additionally place a * near that accepting state.3. One state is designed the state ,or initial state ., it is indicated by an edge labeled “start” entering from nowhere .the transition diagram always begins in the state before any input symbols have been used. Deterministic Automata:A deterministic finite automata has at most one transition from each state on any input. A DFA is a special case of a NFA in which:-1. it has no transitions on input € ,2. Each input symbol has at most one transition from any state.DFA formally defined by 5 tuple notation M = (Q, ∑, δ, qo, F), where Q is a finite ‘set of states’, which is non empty.∑ is ‘input alphabets’, indicates input set. qo is an ‘initial state’ andqo is in Q ie, qo, ∑, Q F is a set of ‘Final states’,δ is a ‘transmission function’ or mapping function, using this function the next state can be determined.The regular expression is converted into minimized DFA by the following procedure:Regular expression → NFA → DFA → Minimized DFThe Finite Automata is called DFA if there is only one path for a specific input from current state to next state. 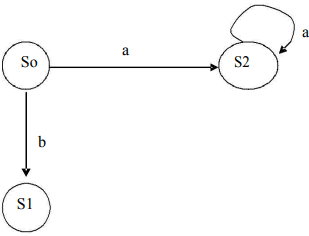 5. Bootstrapping: When a computer is first turned on or restarted, a special type of absolute loader, called as bootstrap loader is executed. This bootstrap loads the first program to be run by the computer usually an operating system. The bootstrap itself begins at address O in the memory of the machine. It loads the operating system (or some other program) starting at address 80. After all of the object code from device has been loaded, the bootstrap program jumps to address 80, which begins the execution of the program that was loaded. 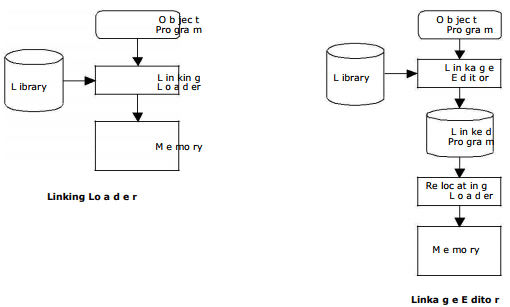 6. Pass And Phases Of Translation: Phases:(Phases are collected into a front end and back end)Frontend: The front end consists of those phases, or parts of phase, that depends primarily on the source language and is largely independent of the target machine. These normally include lexical and syntactic analysis, the creation of the symbol table, semantic analysis, and the generation of intermediate code. A certain amount of code optimization can be done by front end as well. the front end also includes the error handling tha goes along with each of these phases.Back end: The back end includes those portions of the compiler that depend on the target machine and generally, these portions do not depend on the source language .