Transmission LinesMeasurement and/or control signals are carried through various transmission lines. Various process piping, connection and transmission lines, as per the standard set by International Society of Automation (ISA), are listed in the following figure.

Final Control ElementThe hardware component of a control loop that resides between the process and the controller and implements the control action is called the Final Control Element (FCE). It receives the control signal from the controller and regulates the value of the manipulated variable accordingly. An ideal FCE should be an instantaneously operating hardware that does not induce any time lag between process and controller. However, in reality it is impossible to find such an instantaneously operating FCE. Nevertheless any FCE, whose time constant is very small, is considered to be a good hardware for a control system.

Various types of FCEs are available in process industries that are widely used in control applications. They can be largely classified based on their energy source, viz . Pneumatic, Hydraulic and Electric, etc .

A few of them are discussed in Module VII.

Dynamic behaviour of feedback controllerConsider the generalized closed loop process given in the Fig IV.5.

The eq. (13) represents the closed loop response of the process. The pictorial representation is given in the Fig IV.6 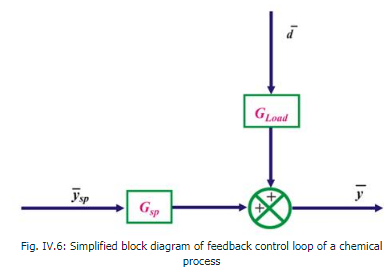 Two types of control problems are encountered with the feedback control systems, viz . servo and regulatory.

When setpoint of a process undergoes a change while the disturbance affecting the process remains constant, i.e.

, the objective of the control system would be to steer the output as close as the setpoint trajectory. In such situation,

However, when the setpoint remains constant, i.e.

, while the disturbance forces the process output to move out of the track of the setpoint, the objective of the control system would be to reject the effect of disturbance as soon as possible and steer the output back to the setpoint trajectory. In such situation,

To expedite the construction of overall closed loop transfer function of any feedback loop, following rules may be applied: