Travelling Salesman Problem (TSP)A graph of a set of cities is given. A salesman starts from a city. He must visit each city exactly once and should finish at the city he starts from. The path he follows should be the shortest one or should have a cost value less than k.Thsu TSP is a special case of Hamiltonian cycle problem where the path cost should be minimum.Consider the following graph containing cities u, v, w, x. 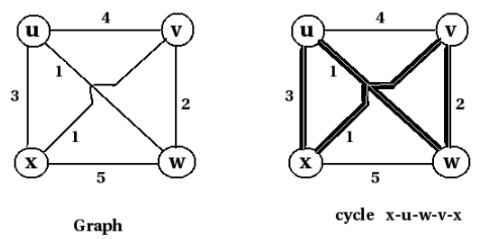 Here the traveling salesman can follow the path x-u-w-v-x which forms the shortest path with cost 7km.

TSP is NP-CompleteWe know that a problem is in class NP-Complete if: it is in NP and it is NP Hard.Theorem:TSP is NP-complete.Proof:Step 1: Prove that TSP is in class NP.A set with n elements has 2n possible subsets. Then a graph with n vertices has 2n possible permutations of vertices.So an algorithm needs to check whether any one of these permutation form a hamiltonian path with cost value less than k. If the graph is represented as an adjacency matrix, it will take n! comparisons. It has worst case time complexityΘ(2√n). (not polynomial time, but exponential time). Let we are given a graph and a ’certificate’ telling that a sequence of vertices form a hamiltonian cycle with cost valueless than k. An algorithm can verify whether this cycle has cost less than k in polynomial time. So TSP is in class NP.

We need to reduce hamiltonian cycle problem to TSP.Consider a graph, 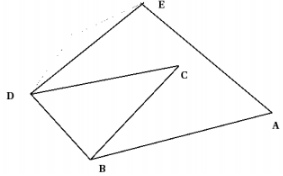 Following is an instance of hamiltonian cycle. 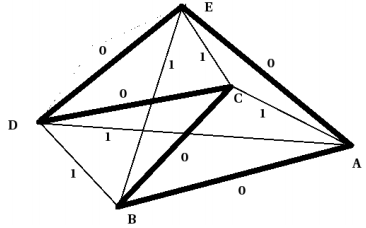 From this, an instance of TSP can be produced from the above graph by traversing through the edges which have cost value 0.Thus hamiltonian cycle problem is reduced to TSP. So TSP is NP-hard.