Kaolinite and halloysite clay minerals are the most common.

Kaolinite MineralThe basic kaolinite unit is a two-layer unit that is formed by stacking a gibbsite sheet on a silica sheet. These basic units are then stacked one on top of the other to form a lattice of the mineral. The units are held together by hydrogen bonds. The strong bonding does not permit water to enter the lattice. Thus, kaolinite minerals are stable and do not expand under saturation.

Kaolinite is the most abundant constituent of residual clay deposits. 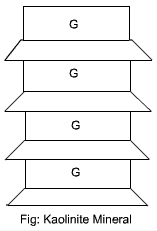 Halloysite Mineral The basic unit is also a two-layer sheet similar to that of kaolinite except for the presence of water between the sheets.

Montmorillonite and illite clay minerals are the most common. A basic three-layer sheet unit is formed by keeping one silica sheet each on the top and at the bottom of a gibbsite sheet. These units are stacked to form a lattice as shown. Montmorillonite Mineral The bonding between the three-layer units is by van der Waals forces. This bonding is very weak and water can enter easily. Thus, this mineral can imbibe a large quantity of water causing swelling. During dry weather, there will be shrinkage. 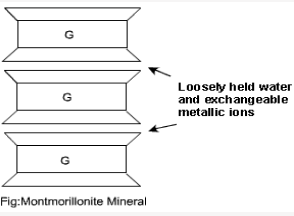 Illite Mineral Illite consists of the basic montmorillonite units but are bonded by secondary valence forces and potassium ions, as shown. There is about 20% replacement of aluminium with silicon in the gibbsite sheet due to isomorphous substitution. This mineral is very stable and does not swell or shrink. 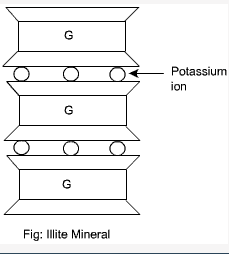 Natural soils are rarely the same from one point in the ground to another. The content and nature of grains varies, but more importantly, so does the arrangement of these. The arrangement and organisation of particles and other features within a soil mass is termed its fabric.

CLAY particles are flaky. Their thickness is very small relative to their length & breadth, in some cases as thin as 1/100th of the length. They therefore have high specific surface values. These surfaces carry negative electrical charge, which attracts positive ions present in the pore water. Thus a lot of water may be held as adsorbed water within a clay mass. 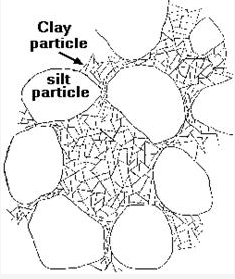