A machine or a structure is made of a large number of parts and they need be joined suitably for the machine to operate satisfactorily. Parts are joined by fasteners and they are conveniently classified as permanent or detachable fasteners. They are often sub- divided under the main headings as follows:

where d is the diameter of the pin at hub-shaft interface, τ is the yield strength in shear of the pin material and T is the torque transmitted.

A taper pin is preferred over the straight cylindrical pins because they can be driven easily and it is easy to ream a taper hole.

These are used to keep two machine parts in proper alignment. Figure- 4.1.2.2 demonstrates the use of dowel pins. Small cylindrical pins are normally used for this purpose. 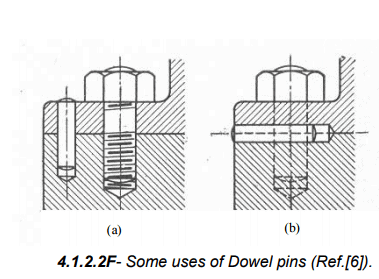 These are sometimes called cotter pins also and they are made of annealed iron or brass wire. They are generally of semi-circular cross section and are used to prevent nuts from loosening as shown in figure- 4.1.2.3. These are extensively used in automobile industry 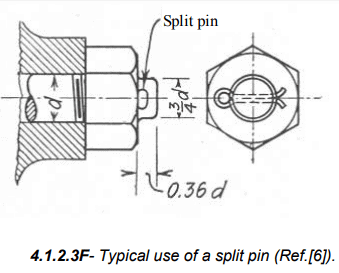 keys are widely used in securing machine parts such as gears and pulleys. There is a large variety of machine keys and they may be classified under fourbroad headings:Sunk keys, flat keys, saddle keys and pins or round keys

Rectangular sunk keys are shown in figure- 4.1.3.1. They are the simplest form of machine keys and may be either straight or slightly tapered on one side. The parallel side is usually fitted into the shaft. The slots are milled as shown in figure- 4.1.3.1(a). While transmitting torque a rectangular sunk key is subjected to both shear and crushing or bearing stresses. Considering shear we may write

where τ is the yield shear stress of the key material, D the shaft diameter and T is torque transmitted. Considering bearing stress we may write

where σbr is the bearing stress developed in the key. Based on these two criteria key dimensions may be optimized and compared with the standard key dimensions .

The gib head keys are ordinary sunk keys tapered on top with a raised head on one side so that its removal is easy. This is shown in figure- 4.1.3.2

Some feather key arrangements are shown in figure- 4.1.3.3. A feather key is used when one component slides over another. The key may be fastened either to the hub or the shaft and the keyway usually has a sliding fit. 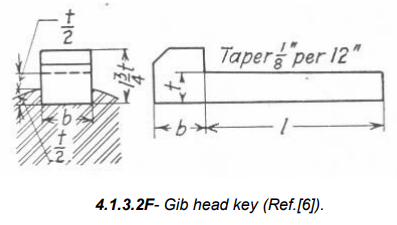 A woodruff key is a form of sunk key where the key shape is that of a truncated disc, as shown in figure- 4.1.3.4. It is usually used for shafts less than about 60 mm diameter and the keyway is cut in the shaft using a milling cutter, as shown in the figure- 4.1.3.4. It is widely used in machine tools and automobiles due to the extra advantage derived from the extra depth. 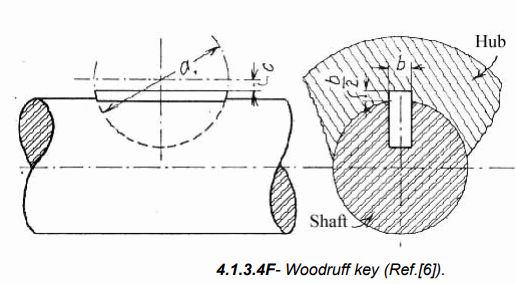 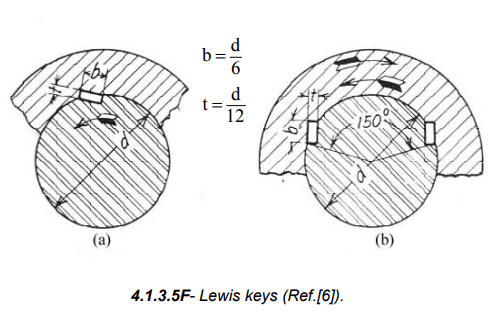 A flat key, as shown in figure- 4.1.3.6 is used for light load because they depend entirely on friction for the grip. The sides of these keys are parallel but the top is

slightly tapered for a tight fit. Theses keys have about half the thickness of sunk keys. A saddle key, shown in figure- 4.1.3.7, is very similar to a flat key except that the bottom side is concave to fit the shaft surface. These keys also have friction grip and therefore cannot be used for heavy loads. A simple pin can be used as a key to transmit large torques. Very little stress concentration occurs in the shaft in these cases. This is shown in figure- 4.1.2.1 (b).