GATE : Types of AM & Its Classification Notes | EduRev

The document Types of AM & Its Classification Notes | EduRev is a part of the GATE Course Communication System.
All you need of GATE at this link: GATE

In the standard form of amplitude modulation, the carrier wave c(t) is completely independent of the message signal m(t), which means that the transmission of the carrier wave represents a waste of power. This is a disadvantage of amplitude modulation; namely that only a fraction of the total transmitted power is affected by m(t). To overcome this , we may suppress the carrier component from the modulated wave, resulting in double-sideband suppressed carrier modulation.

To describe a double-sideband suppressed-carrier (DSBSC) modulated wave as a function of time, we write

A double-sideband suppressed-carrier modulated wave consists simply of the product of the message signal and the carrier wave.For achieving this requirement the device is called a product modulator.

A balanced modulator is combination of two standard amplitude modulators arranged in a balanced configuration so as to suppress the carrier wave. We assume that the two modulators are identical except for the sign reversal of the modulating wave applied to the input of one of them. The outputs of the two modulators may be expressed as follows.

Hence, the balanced modulator output is equal to the product of the modulating wave, except for the scaling factor 2ka and the carrier, as required. One of the most useful product modulators that is well suited for generating a DSBSC modulated wave is the ring modulator, it is also known as double-balanced modulator or lattice. The four diodes in figure shown below forms a ring in which they all point the same way. These diodes are controlled by a square-wave carrier c(t) of frequency fc which is applied by means of two center-tapped transformers. We assume that the diodes are ideal, and the transformers are perfectly balanced When the carrier supply is positive, the outer diodes (D1, D2) are switched on, presenting zero impedance, whereas the inner diodes (D3. D4) are switched off, presenting infinite impedance.

We see that there is no output from the modulator at the carrier frequency; that is, the modulator output consists entirely of modulation products.

(iv) Operation of the Circuit:

From the circuit diagram of ring modulator, we can explain the operation of the circuit as follows. 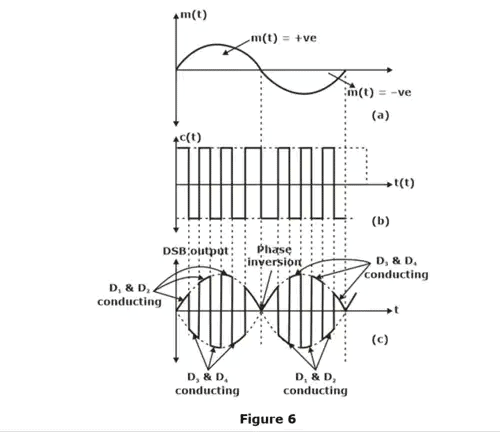 Assume the above spectrum an SSB signal in which lower side band is removed.

Let m(t) have a Fourier transform M(f), thus to eliminate the LSB we write the equation as (i) Generation of SSBSC Wave: In SSB-SC, B.W = ωm, while in DSB-SC or AM, B.W = 2ωm. This reduction in B.W allows signals to be transmitted in the same frequency range. In SSB-SC, more power is saved, and this saved power can be used to produce a stronger signal.

(iii) Conventional AM Over DSBSC and SB Signals

When there is vestige or relaxed in one of the sidebands in DSBSC signal then this is called VSB modulation technique.

The power of VSB wave PVSB can be calculated as

(vii) SSB Over DSBSC and VSB:

Performance Comparison of AM Techniques: