A simple pendulum consists of a heavy point mass suspended from a rigid support by means of an elastic inextensible string.

The time period of the simple pendulum is given by :

where l = effective length of the pendulum and g = acceleration due to gravity.

If the effective length l of simple pendulum is very large and comparable with the radius of earth (R), then its time period is given by

For a simple pendulum of infinite length (l >> R)

For a simple pendulum of length equal to radius of earth,

If the bob of the simple pendulum is suspended by a metallic wire of length l, having coefficient of linear expansion α, then due to increase in temperature by dθ, then

When a bob of simple pendulum of density ρ oscillates in a fluid of density ρo (ρo < p), then time period get increased.

When simple pendulum is in a horizontally accelerated vehicle, then its time period is given by

where a = horizontal acceleration of the vehicle.

When simple pendulum is in a vehicle sliding down an inclined plane, then its time period is given by

Where θ = inclination of plane.

A simple pendulum having time period of 2 second is called second’s Pendulum.

The effective length of a second’s pendulum is 99.992 em of approximately 1 metre on earth.

If a simple pendulum is fixed at one end and the bob is rotating in a horizontal circle, then it is called a conical pendulum. 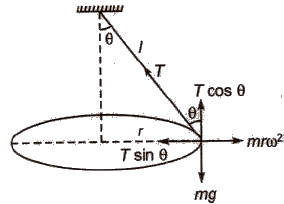 Any rigid body mounted, so that it is capable of swinging in a vertical plane about some axis passing through it is called a physical or compound pendulum.

Its time period is given by

where, I = moment of inertia of the body about an axis passing through the centre of suspension,

m = mass of the body and

l = distance of centre of gravity from the centre of suspension.

Time period of torsional pendulum is given by

where, I = moment of inertia of the body about the axis of rotation and

When a rigid body of any shape is capable of oscillating about an axis (mayor may not be passing through it). it constitutes a physical pendulum. 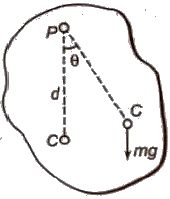 A point mass suspended from a massless (or light) spring constitutes a spring pendulum. If the mass is once pulled downwards so as to stretch the spring and then released. the system oscillated up and down about its mean position simple harmonically. Time period and frequency of oscillations are given by

If the spring is not light but has a definite mass ms, then it can be easily shown that period of oscillation will be

The document Types: Pendulum Notes | Study Physics For JEE - JEE is a part of the JEE Course Physics For JEE.
All you need of JEE at this link: JEE
Join Course