A pesticide is any chemical which is used by man to control pests. The pests may be insects, plant diseases, fungi, weeds, nematodes, snails, slugs, etc. Therefore, insecticides, fungicides, herbicides, etc., are all types of pesticides. Some pesticides must only contact (touch) the pest to be deadly. Others must be swallowed to be effective. The way that each pesticide attacks a pest suggests the best way to apply it; to reach and expose all the pests. For example, a pesticide may be more effective and less costly as a bait, rather than as a surface spray. 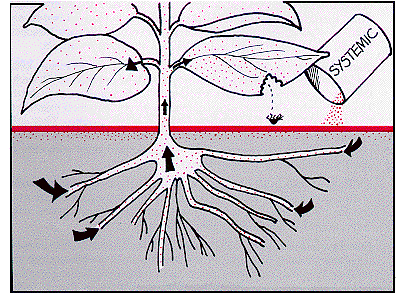 Goals of This Module

Insecticides are chemicals used to control insects. Often the word "insecticide" is confused with the word "pesticide." It is, however, just one of many types of pesticides. An insecticide may kill the insect by touching it or it may have to be swallowed to be effective. Some insecticides kill both by touch and by swallowing. Insecticides called Systemics may be absorbed, injected, or fed into the plant or animal to be protected. When the insect feeds on this plant or animal, it ingests the systemic chemical and is killed.

Narrow Spectrum. While many insecticides are broad spectrum, killing a wide variety of animals by attacking a system common to all, such as the nervous system, a new group of insecticides are much more selective. The chitin inhibitors only affect animals with chitin in their exoskeleton (i.e. insects). Growth regulators are even more specific. They affect certain groups of species that have a particular hormone. Finally, pheromones are the most restrictive because they react with only one species or one sex of a single species.

Chitin synthesis inhibitors interfere with the development and molting of immature insects causing their death. Chitin is the primary structural chemical in an insects body wall. An immature insect treated with a chitin inhibitor dies the next time it attempts to molt.

Insect growth regulators or IGRs mimic the action of an insect's naturally occurring juvenile hormone. They interfere with certain normal processes and prevent immature insects from completing development into normal reproductive adults. The effects of IGRs on insects include abnormal molting, twisted wings, loss of mating behavior, and sometimes death to embryos in eggs. IGRs attack a growth process found only in insects, thus there is a great margin of safety for humans and other vertebrates. However, one disadvantage is that growth regulators act slowly, since they do not kill the insect until it molts into an adult.

Pheromones are naturally produced chemicals used by animals to communicate to each other. There are three basic types of pheromones. Aggregation pheromones attract many individuals together, for example, a site where food may be plentiful. Sex pheromones are used by one sex of a species to attract a mate. Trail pheromones are deposited by walking insects, such as ants, so that others can follow. Synthetic pheromones produced in laboratories mimic these natural chemicals. They are used to attract pest insects into traps, disrupt mating, and monitor populations of insects. Because they do not kill insects, they are often not considered to be pesticides.

Short Term vs. Residual. Insecticides also vary in how long they last as a killing agent. Some break down almost immediately into nontoxic by -products. These "short term" chemicals are very good in situations where the insects do not return or where long-term exposure could injure non-target plants or animals. For example, short-term insecticides are often used in homes and dwellings where people and domestic animals might be exposed. Other insecticides remain active killers for a fairly long period of time. These "residual" pesticides are very useful when the insects are a constant problem and where they will not be an environmental and/or health hazard. For example, residuals are often used for fly control in livestock buildings or for termite control in wooden structures. 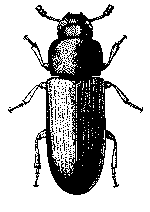 Miticides (or Acaricides) are chemicals used to control mites (tiny Insecticides spider-like animals) and ticks. The chemicals usually must contact the mites or ticks to be effective. These animals are so numerous and small, that great care must be used to completely cover the area on which the mites live. Miticides are very similar in action to insecticides and often the same pesticide kills both insects and mites. The terms "broad spectrum," "short term," and "residual" are also used

Fungicides are chemicals used to control the fungi which cause molds, rots, and plant diseases. All fungicides work by coming in contact with the fungus, because fungi do not "swallow" in the normal sense. Therefore, most fungicides are applied over a large surface area to try to directly hit every fungus. Some fungicides may be systemic in that the plant to be protected may be fed or injected with the chemical. The chemical then moves throughout the plant, killing the fungi. to describe miticides.

Protectant vs. Eradicant. There are two basic approaches in the use of fungicides. One is designed to prevent the plant from getting the disease. These fungicides are used as "protectants" and are similar in purpose to polio and smallpox vaccinations for humans. They are applied before the disease gets a start. This type of fungicide is very useful when a particular disease or group of diseases are likely to attack a plant or crop, year after year. Protectants, for example, have often been used as a routine precaution on fruit and vegetable crops.

The other type of fungicide kills the disease after it appears on (or in) the plant. These fungicides, called "eradicants," are like penicillin or other antibiotics which cure diseases in humans after the sickness appears. Eradicants are less common than protectants because once the fungus is established in a plant, it is often difficult to destroy. Eradicants are often used when protectants aren't available, aren't applied in time, or are too expensive. Eradicants are also applied when the disease appears unexpectedly on a plant or in an area. For example, a common use is on fruit and vegetables when the protectant spray wasn't applied on time to prevent infection. Eradicants are also used by orchardists in combatting diseases of fruit trees, such as apple scab.

Herbicides are chemicals used to control unwanted plants. These chemicals are a bit different from other pesticides because they are used to kill or slow the growth of some plants, rather than to protect them. Some herbicides kill every plant they contact, while others kill only certain plants.

Selective herbicides kill some plants with little or no injury to other plants. Usually selective types will kill either broadleaved plants or grassy plants. These are useful for lawns, golf courses or in areas with desirable trees. Some very selective herbicides may kill only certain plants in a group; for example, crabgrass killers on lawns.

Preplanting vs. Preemergence vs. Postemergence. The timing of an herbicide application is important. Care must be used to get the job done effectively without injuring desirable plants. The directions on the label tell you when to apply the herbicide for best results. Preplanting treatments are made before the crop is planted. These chemicals may be used in seed beds or incorporated into the soil before planting.

Defoliants and desiccants are pesticide materials generally referred to as harvest aids. A defoliant causes the leaves of a plant to drop off early, but does not kill the plant. A desiccant draws moisture from a plant, killing the plant foliage.

Rodenticides are chemicals used to control rats, mice and other rodents. Chemicals which control other mammals, birds, and fish are also grouped in this category by regulatory agencies. Most rodenticides are stomach poisons and are often applied as baits. Even rodenticides which act by contacting the pest are usually not applied over large surfaces because of the hazard to domestic animals or desirable wildlife. They are usually applied in limited areas such as runways, known feeding places, or as baits.

Nematicides are chemicals used to control nematodes. Nematodes are tiny hir-like worms, many of which live in the soil and feed on plant roots. Very few of these worms live above ground. Usually, soil fumigants are used to control nematodes in the soil. (See section on fumigants in Module XV.) However, a few contact insecticides and fungicides are also effective against these tiny worms.

Molluscicides are chemicals used to control snails and slugs. Usually the chemicals must be eaten by the pest to work. Baits are often used to attract and kill snails or slugs in an area.

A repellent is a pesticide that makes a site or food unattractive to a target pest. They are registered in the same way other pesticides are and must be used according to the label. Insect repellents are available as aerosols and lotions and can be applied to skin, clothing, or plants to repel biting and nuisance insects. Vertebrate repellents are available as concentrates to be mixed with water, powders, and granules. They can be sprayed or painted on nursery crops, ornamental plantings, orchards, vineyards, vegetables, and seeds. Repelling deer, dogs, birds, raccoons, and others can protect sites from damage.

If pesticide use is warranted, be sure you know which type of pesticide you need to use, as well as how and when to apply it effectively.