The properties of soil are dependent on either individual grains of the soil (soil grain properties: such as mineralogical composition, size and shape of grains, specific gravity) or on the soil structure, mode of formation, stress history etc. (soil aggregate properties: such as Atterberg limits, permeability, relative density, unconfined compressive strength etc.).

The shape of soil grains is a very useful grain property incase of coarse grained soils. Soil grains can be Bulky, Flaky or plate-shaped, needle-shaped. For Bulky grains, all the dimensions of a grain are more or less same (sand or gravels). The bulky grains can be angular, sub-angular, rounded, sub-rounded. Figure 3.1 shows the various shapes of bulky particle. Soil having particles with high angularity posses higher shearing strength as compared to the soil having less amount of angular particles as particles with high angularity provide more resistance against displacement. Incase of flaky grains, thickness of the particles is vary less as compared to the other two dimensions of the grain (submicroscopic crystals of clay minerals). Incase of needle-shaped grain, one dimension is much longer than the other two dimensions (clay mineral like kaolinite).  1.1 Grain size distribution

Grain size distribution gives an idea about the percentage of various soil grains present in a dry soil sample. Grain size analysis can be carried out by sieve analysis incase of coarse-grained soil (such as sands, gravels) and hydrometer analysis incase of fine-grained soil (such as silt, clay). Incase of hydrometer analysis, Stokes’s law is used to determine the grain size distribution of the soil. 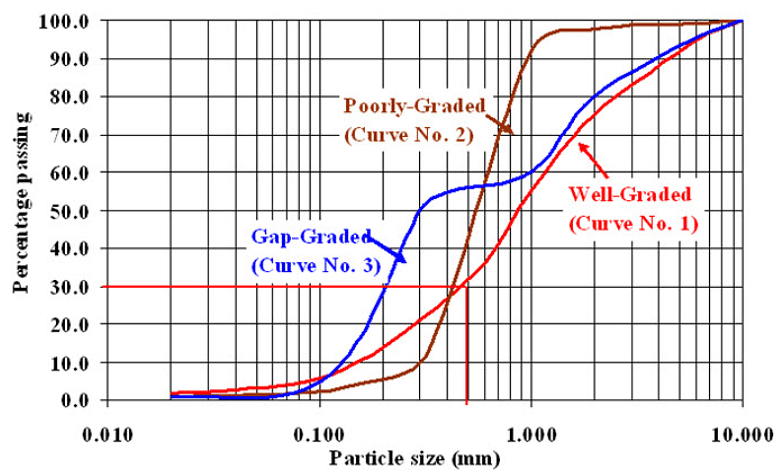