The document Doc: Types of Vectors JEE Notes | EduRev is a part of the JEE Course Mathematics (Maths) Class 12.
All you need of JEE at this link: JEE

A vector has direction and magnitude both but scalar has only magnitude.

Magnitude of a vector a is denoted by |a| or a. It is non-negative scalar.

Two vectors a and b are said to be equal written as a = b, if they have (i) same length (ii) the same or parallel support and (iii) the same sense.

(i) Zero or Null Vector A vector whose initial and terminal points are coincident is called zero or null vector. It is denoted by 0.

(iii) Free Vectors If the initial point of a vector is not specified, then it is said to be a free vector.

(iv) Negative of a Vector A vector having the same magnitude as that of a given vector a and the direction opposite to that of a is called the negative of a and it is denoted by —a.

(vi) Collinear or Parallel Vectors Vectors having the same or parallel supports are called collinear vectors.

(ix) Localized Vectors A vector which is drawn parallel to a given vector through a specified point in space is called localized vector.

(x) Coplanar Vectors A system of vectors is said to be coplanar, if their supports are parallel to the same plane. Otherwise they are called non-coplanar vectors.

Example 1In the figure given below, identify Collinear, Equal and Coinitial vectors: Solution: By definition, we know that

More Solved ExamplesQuestion: In the given figure, identify the following vectors 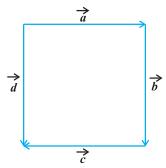