All the road junctions designated for the vehicles to turn to different directions to reach their desired destinations. Traffic intersections are complex locations on any highway. This is because vehicles moving in different direction want to occupy same space at the same time. In addition, the pedestrians also seek same space for crossing. Drivers have to make split second decision at an intersection by considering his route, intersection geometry, speed and direction of other vehicles etc. A small error in judgment can cause severe accidents. It causes delay and it depends on type, geometry, and type of control. Overall traffic flow depends on the performance of the intersections. It also affects the capacity of the road. Therefore, both from the accident perspective and the capacity perspective, the study of intersections are very important by the traffic engineers. Intersection design can vary widely in terms of size, shape, number of travel lanes, and number of turn lanes. Basically, there are four types of intersections, determined by the number of road segments and priority usage.

1. Priority Intersection: Occur where one of the intersecting roads is given definite priority over the other. The minor road will usually be controlled by some form of sing marking, such as stop or yield sign; thus ensuring that priority vehicles travailing on the main street will incur virtually no delay.

2. Space sharing intersection: Are intended to permit fully equally priority and to permit continuous movement for all intersecting vehicle flows; example would be rotaries and other weaving areas.

3. Time Sharing Intersection: Are those at which alternative flows are given the right of way at different point in time. This type of intersection is controlled by traffic signal or by police officer.

4. Uncontrolled intersection: are the most common type of intersection usually occurs where the intersecting roads are relatively equal importance and found in areas where there is not much traffic shown in Fig. 30:1.

At uncontrolled intersection the arrival rate and individuals drivers generally determine the manner of operation, while the resulting performance characteristics are derived from joint consideration of flow conditions and driver judgment and behavior patterns. In simplest terms, an intersection, one flow of traffic seeks gaps in the opposing flow of traffic. 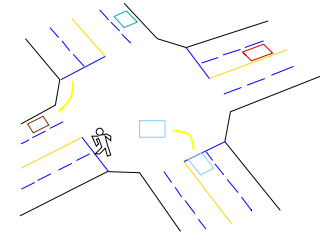 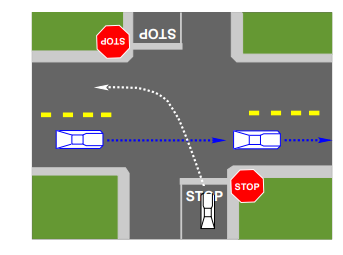 1. The major street through and right-turning movements are the highest-priority movements at a TWSC intersection. This movements shown Fig. 30:3 are 2, 3, 5, 6, 15 and 16.

3. Minor Street through vehicles yield to all conflicting major street through, right-turning, and left-turning movements. The movements on this rank are 8 and 11. 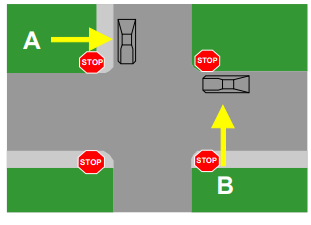 Gap acceptance is one of the most important components in microscopic traffic characteristic. The gap acceptance theory commonly used in the analysis of uncontrolled intersections based on the concept of defining the extent drivers will be able to utilize a gap of particular size or duration. A driver entering into or going across a traffic stream must evaluate the space between a potentially conflicting vehicle and decide whether to cross or enter or not. One of the most important aspects of traffic operation is the interaction of vehicles with in a single stream of traffic or the interaction of two separate traffic streams. This interaction takes place when a driver changes lanes merging in to a traffic stream or crosses a traffic stream. Inherent in the traffic interaction associated with these basic maneuvers is concept of gap acceptance.

1. Gap means the time and space that a subject vehicle needs to merge adequately safely between two vehicles. Gap acceptance is the minimum gap required to finish lane changing safely. Therefore, a gap acceptance model can help describe how a driver judges whether to accept or not.

2. Gap acceptance: The process by which a minor stream vehicle accepts an available gap to maneuver.

3. Critical gap: The minimum major-stream headway during which a minor-street vehicle can make a maneuver.

4. Lag: Time interval between the arrival of a yielding vehicle and the passage of the next priority stream vehicle (Forward waiting time).

8. Delay: The additional travel time experienced by a driver, passenger or pedestrian.

9. Conflicting movements: The traffic streams in conflict at an intersection.

10. Capacity: The maximum hourly rate at which persons or vehicles can reasonably be expected to traverse a point or uniform section of a lane or a roadway during a given time period under prevailing roadway, traffic, and control conditions.

The critical gap tcx for movement x is defined as the minimum average acceptable gap that allows intersection entry for one minor street or major street. The term average acceptable means that the average driver would accept or choose to utilize a gap of this size. The gap is measured as the clear time in the traffic stream defined by all conflicting movements. Thus, the model assumes that all gaps shorter than tcx are rejected or unused, while all gaps equal to or larger than tcx would be accepted or used. The adjusted critical gap tcx computed as follows.

The follow up time tfx for movement “x” is the minimum average acceptable time for a second queued minor street vehicle to use a gap large enough admit two or more vehicles. Followup times were measured directly by observing traffic flow. Resulting follow-up times were analyzed to determine their dependence on different parameters such as intersection layout. This measurement is similar to the saturation flow rate at signalized intersection. Table. 30:1 and 30:2 shows base or unadjusted values of the critical gap and follow up time for various movements. Base critical gaps and follow up times can be adjusted to account for a number of conditions, including heavy - vehicle presence grade, and the existence of two stage gap acceptance. Adjusted Follow up Time computed as: 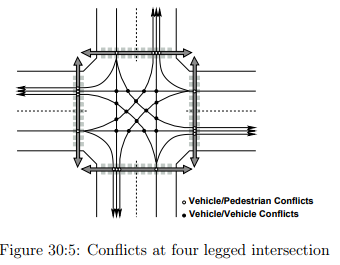 1. Major street left turns seek gaps through the opposing through movement, the opposing right turn movement and pedestrians crossing the far side of the minor street.

2. Minor street right turns seek to merge in to the right most lane of the major street, which contains through and right turning vehicles. Each right turn from the minor street must also cross the two pedestrians path shown.

3. Through movements from the minor street must cross all major street vehicular and pedestrians flows.

4. Minor street left turns must deal not only with all major street traffic flow but with two pedestrians flows and the opposing minor street through and right turn movements. Through this movements the conflict volume (Vcx) for the given movement x is can be computed. As an example the formula of conflict volume for movement 7 for three legged intersection shown in Fig. 30:6 computed as:

Capacity is defined as the maximum number of vehicles, passengers, or the like, per unit time, which can be accommodated under given conditions with a reasonable expectation of occurrence. Potential capacity describes the capacity of a minor stream under ideal conditions assuming that it is unimpeded by other movements and has exclusive use of a separate lane. Once of the conflicting volume, critical gap and follow up time are known for a given movement its potential capacity can be estimated using gap acceptance models. The concept of potential capacity assumes that all available gaps are used by the subject movement i.e.; there are no higher priority vehicular or pedestrian movements and waiting to use some of the gaps it also assumes that each movement operates out of an exclusive lane. The potential capacity of can be computed using the formula: One of the impeding effects for all the movement is pedestrians movement. Both approaches of Minor-street vehicle streams must yield to pedestrian streams. Table. 30:3 shows that relative hierarchy between pedestrian and vehicular streams used. A factor accounting for pedestrian blockage is computed by Eqn. 30.7 on the basis of pedestrian volume, the pedestrian walking speed, and the lane width that is:

The capacities of individual streams (left turn, through and right turn) are calculated separately. If the streams share a common traffic lane, the capacity of the shared lane is then calculated according to the shared lane procedure. But movement capacities still represent an assumption that each minor street movement operates out of an exclusive lane. Where two or three movements share a lane its combined capacity computed as:

Delay is a complex measure and depends on a number of variables it is a measure of driver discomfort, frustration, fuel consumption, increased travel time etc. Total delay is the difference between the travel time actually experienced and the reference travel time that would result during base conditions, in the absence of incident, control, traffic, or geometric delay. Also, Average control delay for any particular minor movement is a function of the Capacity of the approach and The degree of saturation. The control delay per vehicle for a movement in a separate lane is given by:

Four measures are used to describe the performance of TWSC intersections: control delay, delay to major street through vehicles, queue length, and v/c ratio. The primary measure that is used to provide an estimate of LOS is control delay. This measure can be estimated for any movement on the minor (i.e., the stop-controlled) street. By summing delay estimates for individual movements, a delay estimate for each minor street movement and minor street approach can be achieved. of the TWSC intersection, LOS of the minor-street left turn operates at level of service C approaches to B.

For a three legged intersection given in figure 30:7 determine the control delay and level of service for movement 7. The total volume of both pedestrian and vehicular traffic at each movement is given in the figure itself. Following data is also given:

• The speed of the pedestrians is 1.2m/s

4.Determine the impudence effect of the movement capacity for movement 7: From the given figure movement 7 is impeded by vehicular movement 4 and 1 and pedestrian 13 and 15. (a) Pedestrian impedance probability computed as:

(b) Vehicular impedance probabilities are:

(c) Once the pedestrian and vehicular impedance is determined, the moment capacity is computed as:

5. Delay computation: The delay is Calculated by using the formula

This chapter focuses on theoretical analysis of capacity at uncontrolled intersections. First the gap acceptance theory and follow time was described; including conflict volume determination through the hierarchy of priorities for two ways stop controlled intersection. Second, after determining the potential capacity using the computed value and then prepare an adjustment for this capacity. Finally, computation of the delay to determine the level of service (LOS) of the given intersection is also described.